This is the eighth entry in the blog series on using Java Cryptography securely. The first few entries talked about architectural details, Cryptographically Secure Random Number Generators, encryption/decryption, and message digests. Later we looked at What???s New in the latest Java version. All of this equipped us to talk in detail about some of the most common Cryptographic applications. We started by looking at the symmetric cryptography-based application with Message Authentication Code.

Password being such a central piece of any authentication-based system, every developer would be involved with it at some point in his or her career. These are usually stored in databases. Due to various vulnerabilities like SQL Injection, Remote Code Execution, etc., these databases could be compromised[16]. It becomes exceedingly important to make sure these stored passwords can???t be cracked offline easily.

Historical methods of storing passwords[15] have fallen short against growing computing powers, modern computer architectures, and enhanced attacks. Currently, the most secure way to store passwords is using Password Based Encryption (PBE), which provides functions (called Key Derivation Functions (KDFs)) that will convert low entropy user passwords into random, unpredictable, and most importantly one-way, irreversible bytes of data. It should be these bytes of data which should be stored and never plain text passwords to safeguard against offline attacks. KDFs used to generate these random bytes of data are commonly called as password hashing algorithms. They can also be extended to store any kind of sensitive information such as PII (Personally Identifiable Information) which your business needs to protect against offline attacks.

Skip to the TL; DR

Construction of KDFs has evolved over time. There are twoﾂ?broad categories of password hashing algorithmsﾂ?that are widely implemented:

Each of these algorithms has some set of parameters that needs to be configured judiciously. Before getting into a full-fledged conversation about various algorithms, let???s talk about some of the commonalities:

1. Salt Generation: When designing salting features of your application, make sure:

2.ﾂ?Work Factor: Work Factors are parameters used for each password hash computation with the sole purpose of making hash calculations slower, thus more computationally expensive, which in turn makes offline password cracking slower. For adaptive functions, the only work factor involved is the numberﾂ?of crypto iterations per calculation. With memory hard functions, we additionally have a few more parameters such as memory and CPU threads which adds more complexity to hashing, making it that much harder for offline cracking. Things to consider while thinking about Work Factors:

ﾂ? Work Factors: Should be a fine balance between security and performance, configured unique to server, different per user, and re-tuned periodically

Let’s start discussing the algorithms to be considered in detail followed by some of the runner-ups:ﾂ?

Being the newest addition in the password hashing algorithms arsenal, library implementations were sparse a few years ago, but most mainstream providers have caught up. Unfortunately, not JDK.

HowTo: How Does Argon2 Work?

This elegant algorithm is based on Blake2-like hashing and a configurable amount of memory table (m) to be re-filled multiple times(t) using some degree of parallelism(p). 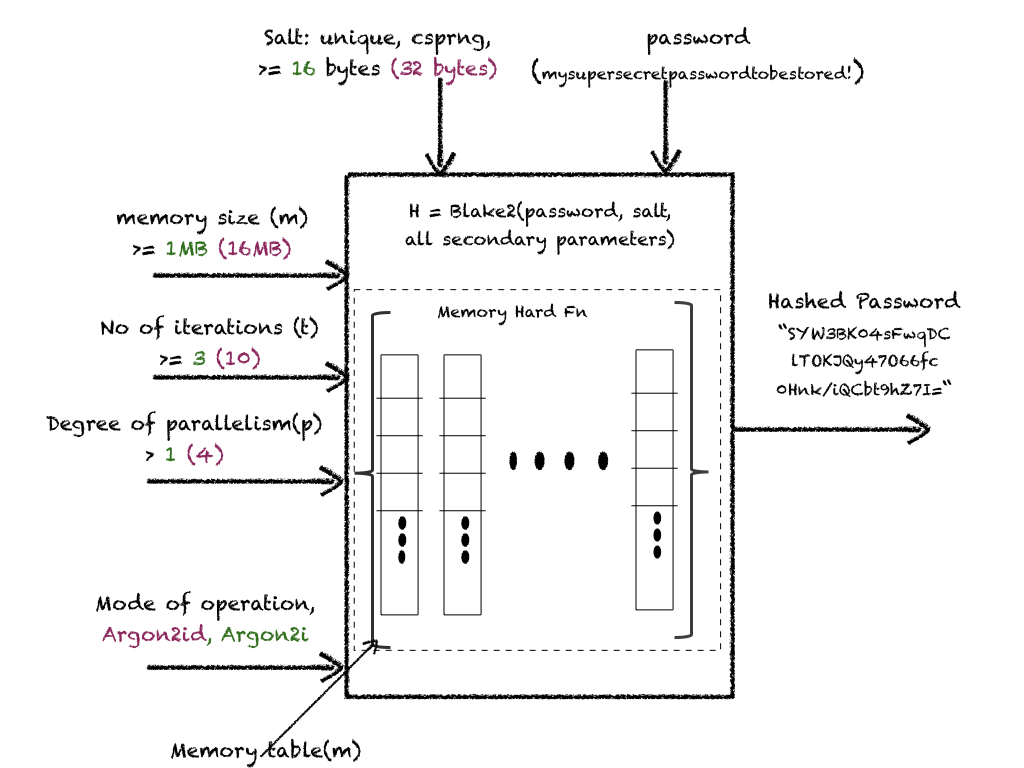 HowTo: Decide If This Is The Right Choice For Me?

One of the most widely adopted government standardized password hashing algorithmﾂ?is PBKDF2. PBKDF2 was designed for generating keying material for symmetric encryption. Due to its inherent configurable property to make it run slower, treating keying material derived out of this algorithm as password hashes, turned out to be a far secure choice than storing salted hashed password. It was more a knee-jerk reaction to pick something from the available crypto tools at the time, to protect against the ever-increasing offline cracking incidences.

PBKDF2 is the only password hashing algorithm available right out of JDK.

HowTo: How Does PBKDF2 Work?

Password hashes are computed by applying HMAC algorithm to password and salt, repeatedly for iteration number of counts(c). This iteration count is responsible for slowing down the password generation, providing mitigation against brute forcing attacks. 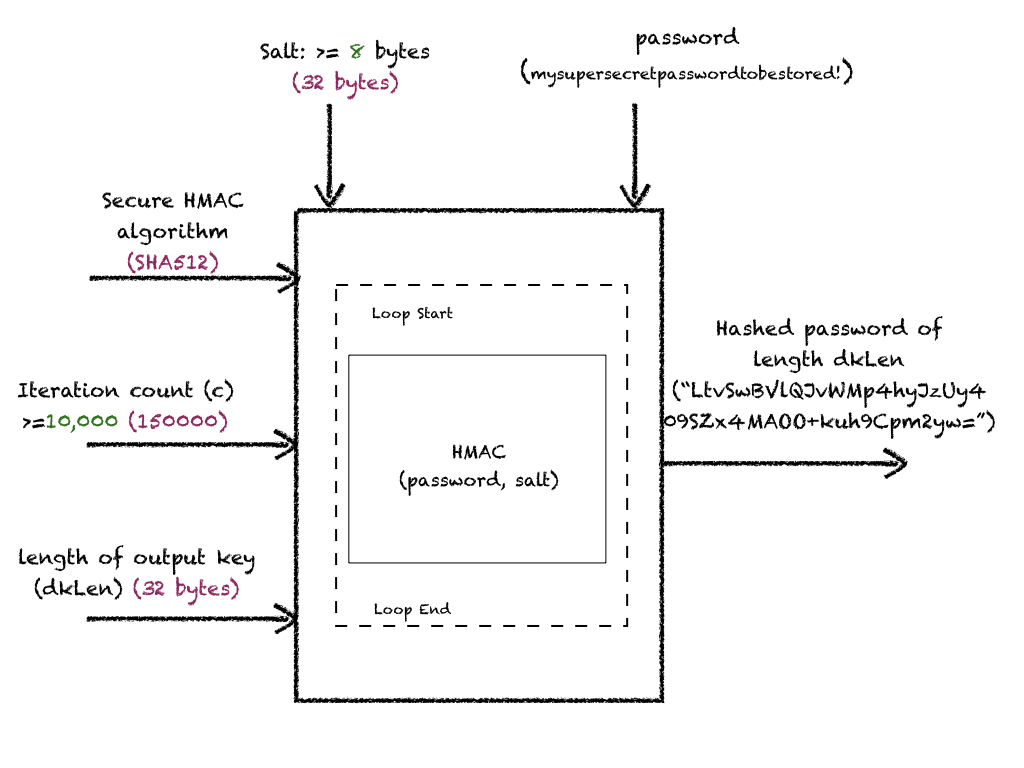 Complete code can be referenced at PBKDF2PasswdStorage.java.

HowTo: Decideﾂ?If This Is The Right Choice For Me?

Bcrypt is slightly better than pbkdf2, which provides some memory intensive work in addition to CPU intensive operations. It is based on blowfish symmetric cipher. Like PBKDF2, this algorithm is also roughly two decades old.

HowTo: How Does bcrypt Work?

It relies on an expensive key setup phase running blowfish based encryption scheme applied a number of iterations times. Briefly, just as pbkdf2, cost factor defines how slow the password computation would be and should be configured accordingly. 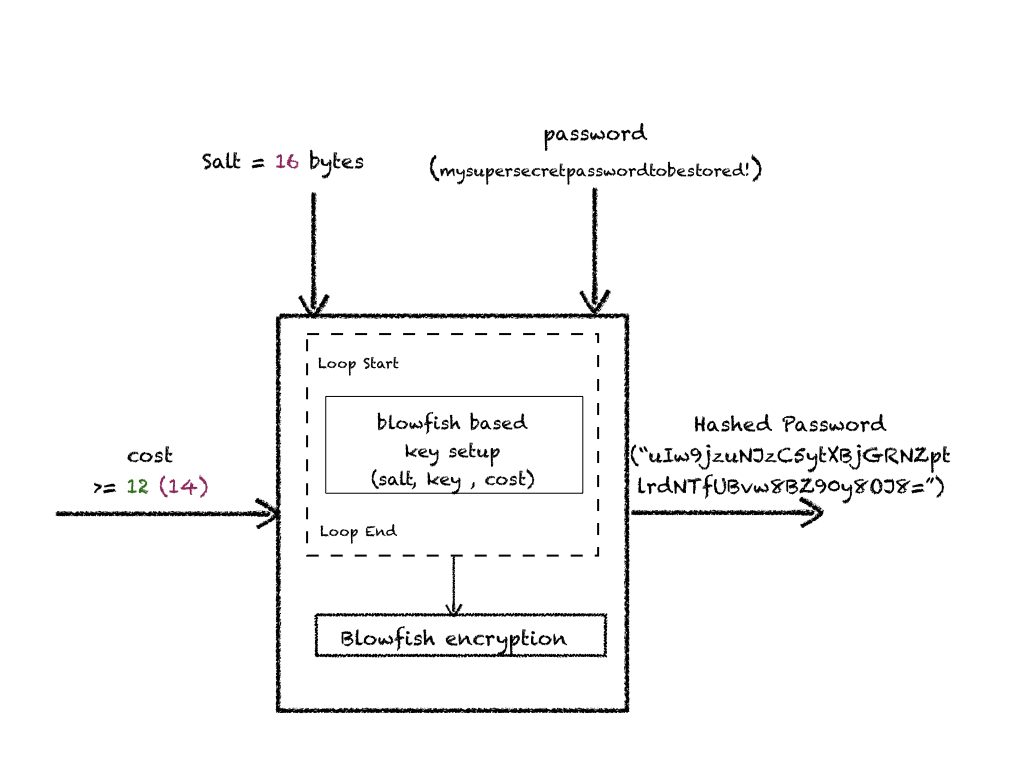 Bcryptﾂ?class provides implementation for this algorithm.

Complete code can be referenced at BcryptPasswordStorage.java.

HowTo: Decideﾂ?If This Is The Right Choice For Me?

Scrypt is one of the earlier generation memory hard functions. It is a solid choice compared to adaptive functions discussed above, giving a lot of parameter tuning options. Its need for lot more resources for its computations effectively diffuses most of the large-scale parallel attacks. Like all the above functions, scrypt is also designed with a focus on deriving key materials, rather than passwords. It???s getting increasing adoption in crypto-currencies like Litecoins, YACoin, etc. 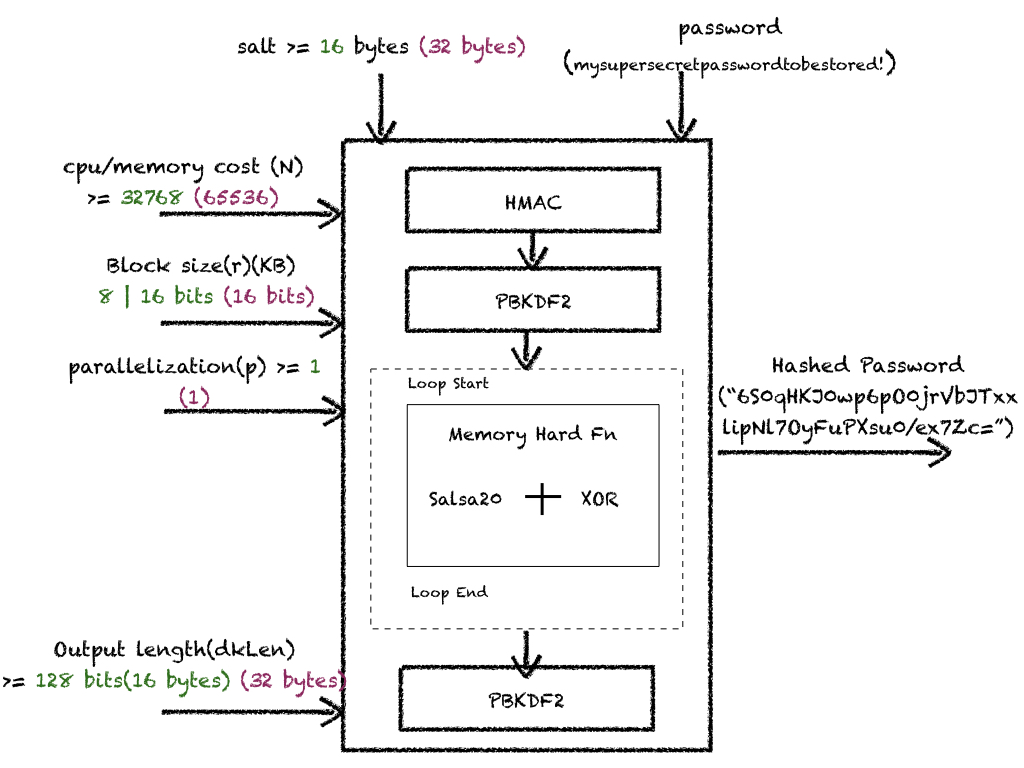 We would need to depend on bouncycastle???s low-level API (non-provider supplied) and place bouncycastle’s jar file on class path. Scryptﾂ?supplies implementation to generate keys using this class.

For a complete working example, refer to ScryptPasswordStorage.java.

HowTo: Decide If This Is The Right Choice For Me?

This post should equip you to choose the right algorithm to store sensitive information, how to meticulously tune each required input parameter and how to code it all up in Java.ﾂ?

Designing password hashing mechanisms is one piece of a much-complicated puzzle, where coding tools can help. It is equally important to choose passwords wisely. A lot of experimental results are available which emphasize the criticality of choosing longer, higher entropy passwords[13] which will significantly increase the work involved in cracking them offline.

I will encourage you to experiment with various password storage algorithms, by invoking corresponding endpoints discussed in Java Crypto MicroService.

*** This is a Security Bloggers Network syndicated blog from Application Security Research, News, and Education Blog authored by msheth@veracode.com (msheth). Read the original post at: https://www.veracode.com/blog/research/password-storage-using-java