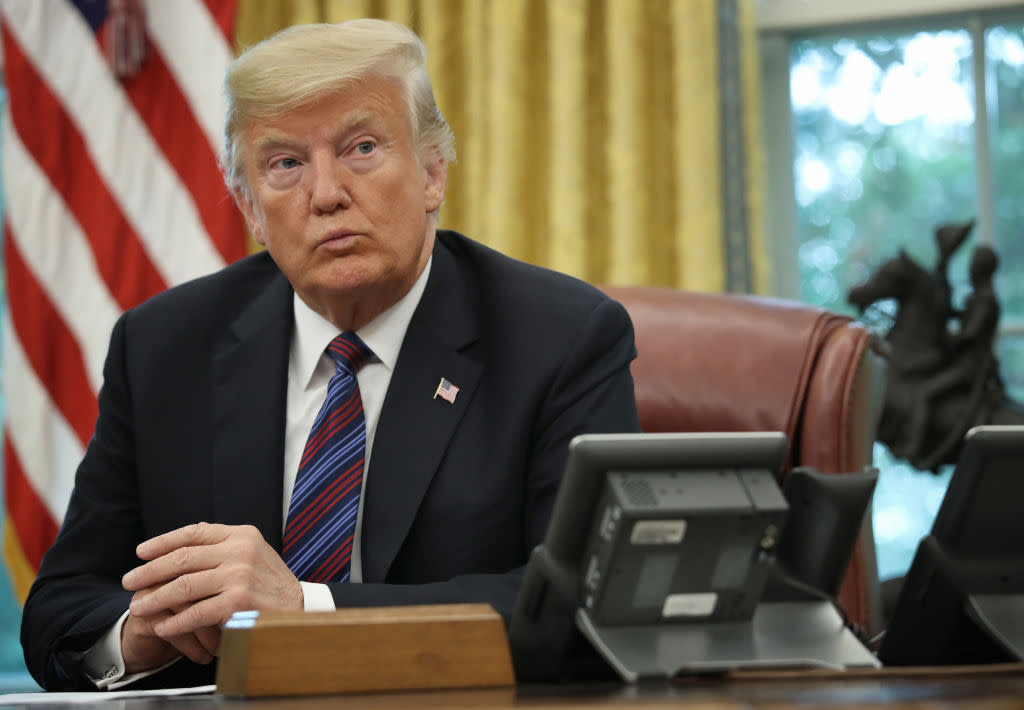 (Bloomberg) — President Donald Trump turned over to Congress a secret whistle-blower’s complaint that sparked congressional investigations of his interactions with Ukraine President Volodymyr Zelenskiy. The House Intelligence Committee questioned Joseph Maguire, the acting director of national intelligence, on Thursday about why he initially ordered the complaint withheld from Congress.

Here are the latest developments:

Trump lashed out at the whistle-blower complaint that’s fueling a congressional impeachment probe and suggested that passing along allegations that he committed wrongdoing was tantamount to treason.

Speaking Thursday behind closed doors to diplomats at the U.S. mission to the United Nations in New York, Trump faulted the whistle-blower for relaying second-hand information about the president’s July phone call with Zelenskiy. A recording of the comments was posted online by the Los Angeles Times.

He demanded to know the identity of the whistle-blower’s sources. “Who’s the person who gave the whistleblower the information — because that’s close to a spy,” he said. “You know what we used to do in the old days when we were smart? Right? The spies and treason, we used to handle it a little differently than we do now.”

Zelenskiy made an appearance at the Sept. 11 memorial in New York on Thursday, laying a wreath with yellow and blue flowers. He declined to take questions from reporters about his interactions with the Trump administration.

A day earlier, Zelenskiy met with Trump in New York and indicated to reporters that he didn’t feel pressured by Trump to re-open an investigation into former Vice President Joe Biden. Ukraine’s president visited the U.S. during the week of the United Nations General Assembly.

House Intelligence Chairman Adam Schiff said he wants to know what part Attorney General William Barr and Trump attorney Rudy Giuliani may have had in Trump’s discussions with the president of Ukraine. Both were named in the notes of the two leaders’ phone conversation earlier this year.

After Thursday’s Intelligence panel hearing ended, Schiff told reporters his committee will work through Congress’s upcoming two-week recess to investigate the whistle-blower’s complaint, which he said proves a “road map” of areas that the probe should go.

”We are going to move as expeditiously as possible,” the chairman said.

After the hearing ended, Trump responded on Twitter: “A whistleblower with second hand information? Another Fake News Story! See what was said on the very nice, no pressure, call. Another Witch Hunt!”

He also lashed out at the Democratic chairman of the House Intelligence Committee.

As the hearing neared its end, Schiff said he disagreed with Maguire’s decision to consult the White House and Justice Department on whether the whistle-blower’s complaint should be investigated.

“If the subject of a complaint can keep that complaint from getting to Congress, then the most serious complaints may never get here,“ Schiff said.

The chairman also said he had a message for the people of Ukraine.

“We support you in your fight with Russia” and Ukraine’s fight against corruption and for democracy, he said, adding that what they are are seeing “in the actions of this president is not democracy.”

“This is democracy,” said Schiff, referring to Thursday’s committee hearing.

Earlier, Democrat Denny Heck of Washington asked Maguire, “Is it OK for a president of the United States to pressure a foreign government for help to win an election?”

Maguire responded: “It is unwarranted, it is unwelcome, it is bad for the nation to have outside influence by any foreign power” on elections.

Top committee Republican Devin Nunes concluded by saying that if Democrats on the panel “would like to impeach the president, they need to go to the floor of the House and actually call for a vote.”

“The Intelligence Committee is not an appropriate place to try articles of impeachment,” Nunes said. “There is a process in the Constitution I would advise you to follow.”

House Speaker Nancy Pelosi told reporters the whistle-blower’s allegation that the White House tried to “lock down” records of Trump’s interaction with Ukraine’s president amounts to a “cover-up” by the administration.

Pelosi said lawmakers need to “get the facts” before deciding whether to impeach Trump. “This is a heavy decision to go down this path,” she said.

She said she told Trump he is now in her “wheelhouse” on matters of intelligence, given her experience in the matter.

“It is is not the role of the president to shake down foreign leaders for his own political purpose,” Pelosi said.

Maguire said, “emphatically, no,” when asked by Democrat Jackie Speier whether Trump ever asked him to find out the whistle-blower’s identity. He also said nobody else in the White House asked him to do so.

“I am not political, I am not partisan, and I did not look to be sitting here as the acting director of national intelligence,” Maguire said while being questioned by Republican Chris Stewart of Utah. “But the president asked me to do this.”

“Good luck convincing the American people that this is a dishonorable man sitting here,” Stewart said.

Committee Chairman Adam Schiff responded, “No one is suggesting that there is a dishonor here, but nevertheless we are going to insist that the law be followed.”

Schiff had asked whether the person will be able “to relay the full facts within his knowledge of wrongdoing” and “be able to testify fully, and freely, and enjoy the protection of the law.” It was unclear whether the person would appear in public or behind closed doors.

Maguire said he was “not stonewalling” when he delayed turning over the complaint. “I have to comply with the way the law is, not the way some people would like it to be,” he said.

A Republican member of the committee, Mike Turner of Ohio, said Trump’s call with Zelenskiy is “disappointing” to Americans.

“That conversation is not okay,” Turner said.

Maguire wouldn’t say whether he has discussed the whistle-blower’s complaint with Trump.

Maguire said the White House hasn’t instructed him to exert that privilege. He also said he wasn’t told by the White House not to turn over the whistle-blower complaint to Congress.

Maguire said he doesn’t know who the whistle-blower is, adding that his job is to protect the person from reprisals.

“You don’t believe the whistle-blower is a political hack, do you?” House Intelligence Chairman Adam Schiff said, referring to Trump’s statement dismissing the complaint as “another political hack job.”

Asked why Maguire went to the White House to ask whether the complaint should be turned over to Congress, the intelligence official said that because the matter involved issues of executive privilege, it “seemed prudent” to check with the administration.

Maguire said he believes that the whistle-blower and the intelligence community’s inspector general acted in “good faith.”

He said executive privilege prevented him from initially forwarding the whistle-blower’s complaint to congressional intelligence committees, because the allegations involved a call between the president and the leader of a foreign government.

“I believe that this matter is unprecedented,” Maguire said.

House Intelligence Chairman Adam Schiff said at a hearing that the whistle-blower complaint brought to light “gross misconduct” by the president.

Schiff questioned why Maguire didn’t provide the complaint to the committee and “stood silent when an intelligence professional under your care and protection was ridiculed by the president, was accused of potentially betraying his or her country.”

“This matter would not have come to the attention of our committee, or the nation’s attention, without the courage of a single person — a whistle-blower,” Schiff said.

The committee’s top Republican, Devin Nunes, said the complaint “relies on hearsay evidence of the whistle-blower,” and called the controversy the latest “fake news story” from Democrats and their “media assets.”

The whistle-blower complained of learning from multiple U.S. officials that Trump’s personal lawyer, Rudy Giuliani, traveled to Madrid in early August to meet with one of Zelenskiy’s advisers, Andriy Yermak. Giuliani has sought to investigate and amplify allegations about former Vice President Joe Biden’s activities in Ukraine.

U.S. officials characterized the meeting as a follow-up to Trump’s call with Zelenskiy, according to the complaint.

The whistle-blower said that he or she didn’t have direct knowledge of the phone call with Ukraine’s leader, but heard multiple accounts from other officials who were concerned.

“White House officials who told me this information were deeply disturbed by what had transpired in the phone call. They told me that there was already a ‘discussion ongoing’ with White House lawyers about how to treat the call because of the likelihood, in the officials’ retelling, that they had witnessed the president abuse his office for personal gain,” the letter said.

“I learned from multiple U.S. officials that senior White House officials had intervened to ‘lock down’ all the records of the phone call, especially the word-for-word transcript of the call that was produced — as is customary — by the White House Situation Room,” the whistle-blower said in a letter addressed to the chairmen of the House and Senate Intelligence committees.

“White House officials told me that they were ‘directed’ by White House lawyers to remove the electronic transcript from the computer system in which the transcripts are typically stored,’ the whistle-blower wrote.

The whistle-blower report regarding President Donald Trump’s interactions with the Ukrainian president has been declassified and released Thursday by the House Intelligence Committee.

The complaint from an unnamed intelligence official concerns a sequence of events including Trump’s July 25 call with Ukraine’s Volodymyr Zelenskiy. That call and the complaint moved House Democrats to go forward with an impeachment inquiry against Trump this week.

Michael Atkinson, the inspector general of the intelligence community, said in a separate letter dated Aug. 26 that the complaint “appears credible.”

The whistle-blower complaint about Trump has been lightly redacted and declassified so that it can be released to the public, according to people familiar with the matter.

The Trump administration turned the whistle-blower’s report over to select lawmakers Wednesday, following the release of a White House memo of Trump’s July 25 call with the Ukrainian president. The report is expected to be released to the public Thursday morning, according to the people who asked for anonymity to discuss information not yet public.

Maguire headed off a confrontation over whether Congress would see the complaint after the administration agreed to give it to the intelligence panels, but Democrats want to know — among other things — why he withheld it in the first place, and whether he was responding to political pressure from Trump.

House Intelligence Chairman Adam Schiff said the allegations in the whistle-blower’s report are “deeply disturbing” and expose “serious wrongdoing” after he viewed it Wednesday along with other committee members.House Speaker Nancy Pelosi is weighing fellow Democrats’ suggestions to limit the impeachment probe to Trump’s interactions with the Ukraine government, a Democratic leadership official said.Trump said Wednesday he was surprised Democrats are moving to impeach him. “I thought we won, I thought it was dead” after Special Counsel Robert Mueller’s report didn’t lead to impeachment, he said.Some Senate Republicans showed discomfort with Trump’s conversation with Zelenskiy but said a rough transcript of the call didn’t warrant removing the president from office. Senator Pat Toomey, a Pennsylvania Republican, said he gave Trump a pass because the memo “reveals no quid pro quo.”

To contact the editors responsible for this story: Joe Sobczyk at jsobczyk@bloomberg.net, Laurie Asséo

bloomberg.com” data-reactid=”107″>For more articles like this, please visit us at bloomberg.com