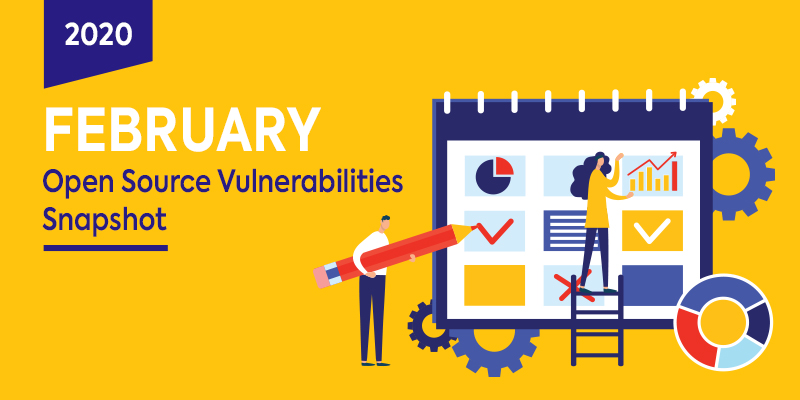 We are already deep into Q1 2020, and we thought it would be a good time to take a look at some of the data we’ve already gathered this year to learn about the new open source security vulnerabilities published in February, what we should look out for, and how the community is addressing the newest challenges. 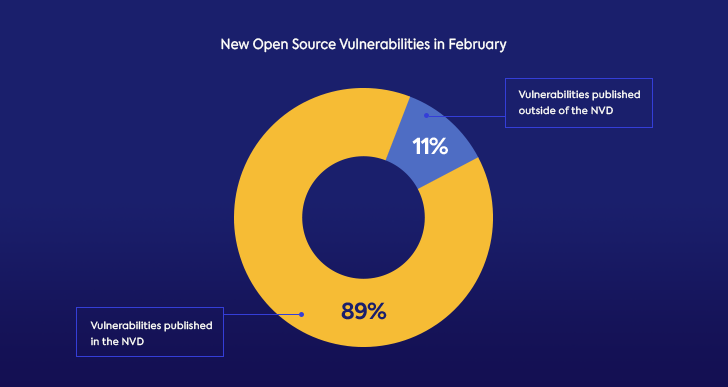 Beyond the overall number of newly published open source security vulnerabilities in February, we also wanted to look at their severity scores. 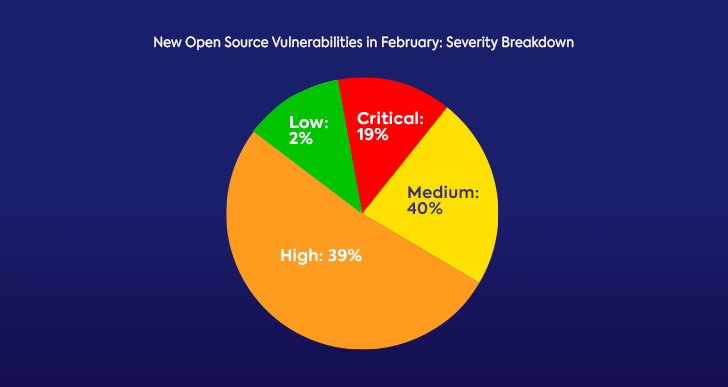 Looking at the severity distribution of the CVSS v3 scores for new open source security vulnerabilities in February, we found that 58% were either critical or high-severity. With the increasingly rising number of security alerts that development teams are required to address, this distribution is particularly concerning. Teams often look to severity scores to prioritize which issues to address first, and if nearly 60% of all open source security vulnerabilities are scored high and critical, addressing them all is a challenge.

Another aspect that we wanted to take a closer look at in order to better understand which strategies to adopt when addressing open source security is the types of open source vulnerabilities published this month. 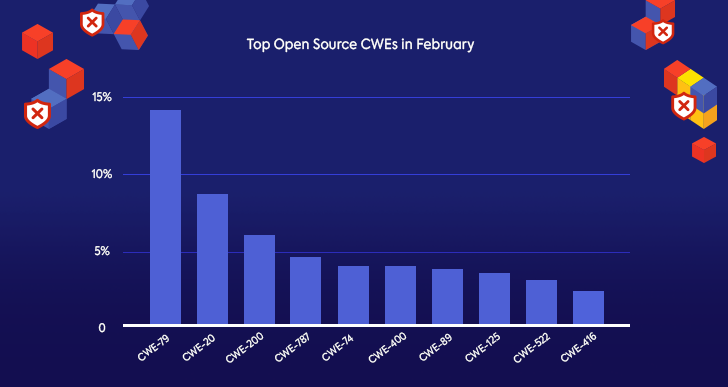 The top CWE this month is CWE-79, otherwise known as XSS (cross-site scripting). An XSS vulnerability occurs when an attacker is able to inject malicious script into a web page. This type of attack allows a hacker to access a wide variety of user information, like session tokens, cookies, and potentially any other type of information that the user provided to a presumably trustworthy website.

Number five in February’s top open source CWE’s list is CWE-74, which is the “parent” of CWE-79 (XSS), and therefore more abstracted. CWE-74 describes a general Injection weakness, not necessarily a script, and not necessarily related to a web page or site. CWE-74 occurs as a result of lack of input sanitation of a special element, like a comment section in a blog post, a URL, user authentication, or files parser. This CWE-74 can only be associated with a vulnerability if the vulnerability can’t be linked to one of its many children, for example, XSS, SQL Injection, Command Injection, Code Injection, and others.

Since open source security starts with secure coding, we also wanted to check which programming languages saw the most open source vulnerabilities published in February. 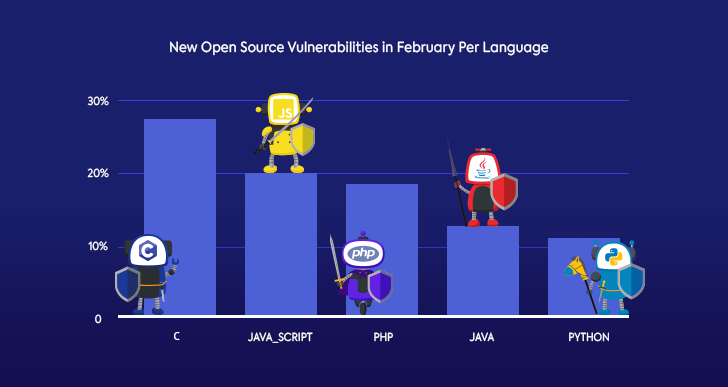 Understandably, some of the most popular programming languages saw the most new open source vulnerabilities. Since C has been around the longest, and probably has the most lines of code behind it, the language behind the Linux kernel came in first.

Not far behind is JavaScript, also a highly popular language. This also matches the top CWE’s data that we found, since XSS and injection issues are extremely common in JavaScript.

Since XSS came in first in the common CWEs list, let’s take a closer look at two new open source security vulnerabilities published in February, which demonstrate CWE-79 and its parent, CWE-74.

CVE-2019-10785 is an XSS (CWE-79) vulnerability in the dojox project, originally a development area for the Dojo Toolkit, which contains packages that run the gamut of JavaScript technology.

WHAT ARE THE MOST SECURE PROGRAMMING LANGUAGES? Download Free
Report

Due to insufficient sanitation of their XML encoder, this vulnerability could allow attackers to inject a malicious XML file into the dojox xmpp server. On top of that, any user implementing “dojox.smpp.util.xmlEncode()” directly is vulnerable to this exploit. You can learn more about this issue and its fix on GitHub’s security advisory.

CVE-2019-10795 is a Prototype Pollution vulnerability in the undefsafe project. This issue occurs when insufficient neutralization of a user’s input (CWE-74) overwrites a JavaScript application object prototype, which eventually allows attackers to inject malicious code. Read more about this issue on GitHub.

Keeping Up with Open Source Security

*** This is a Security Bloggers Network syndicated blog from Blog – WhiteSource authored by Patricia Johnson. Read the original post at: https://resources.whitesourcesoftware.com/blog-whitesource/march-open-source-security-vulnerabilities-snapshot