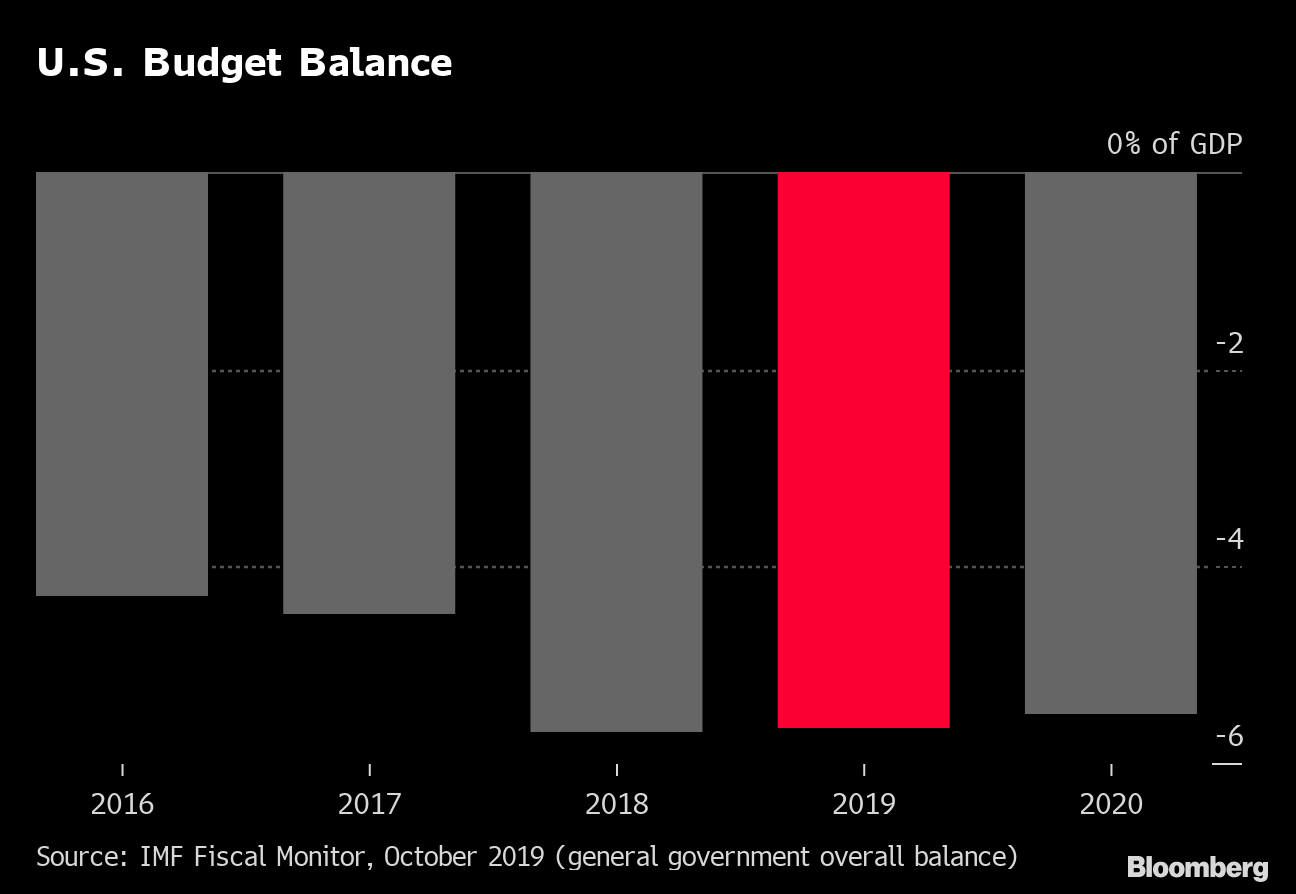 (Bloomberg) — Governments are failing to heed the pleas of their central bankers for more spending to support a slowing world economy.

Monetary policy makers say they’re running out of room to cut interest rates, which are already at historic lows, and it’s time for their fiscal counterparts to take the lead in trying to spur demand. But a review of budget plans in a dozen capitals suggests politicians aren’t stepping up particularly fast –- even though it’s cheap or free to borrow on bond markets.

That spells more bad news for global growth. The International Monetary Fund this week predicted the weakest expansion in a decade amid the U.S.-China trade war, and warned that budget chiefs in major economies “should be prepared for coordinated action in case of a severe downturn.”

And it’s a missed opportunity, according to a recent study by Oxford Economics. It found that in almost all large developed countries, and some of the main emerging markets too, spending an additional 1% of gross domestic product would deliver more than that amount of growth for each economy -– and have knock-on benefits for others too.

Following is an overview of the fiscal state of play in the world’s most important economies.

It’s harder to track budget stimulus than the monetary kind, because taxes and spending happen at both national and local levels. The headline numbers below are from the latest IMF Fiscal Monitor, published this week, and may differ from those provided by finance ministries.

President Donald Trump juiced the economy last year with a $1.5 trillion package of tax cuts along with increases in spending, especially for the military. But the effect has petered out in 2019, and concern that the economy could slide into recession is mounting.

Trump, who’s up for re-election in a year’s time, has held out the prospect of more stimulus. Last month, he promised “very substantial” tax cuts in 2020 that would benefit “middle-income” Americans — maybe a nod to the widespread view among economists that the last round favored the wealthy. Treasury Secretary Steven Mnuchin referred to “Tax Cuts 2.0.”

Little more has been heard of the idea. Trump’s comment coincided with the start of a televised debate among his Democratic rivals, and the fact he’s dropped similar hints before without following up has left many analysts skeptical. In any case, Trump’s Republicans lost control of the House at the end of last year. So any new package would need support from Democratic lawmakers whose spending priorities are different.

“The chance of additional fiscal stimulus being incorporated ahead of the 2020 election is remote, given the nearly insurmountable hurdle of crafting a package that would appeal to both House Democrats and Senate Republicans — particularly given the increasingly toxic climate amid impeachment investigations.”– Carl Riccadonna, Bloomberg Economics

China rolled out tax cuts on personal income and corporate profits early this year that are estimated to be worth 2 trillion yuan ($280 billion), and Finance Minister Liu Kun said last month that they’ve had a bigger than expected impact.

The central government’s budget only captures part of what policy makers are doing to stimulate the economy. The IMF figures also include spending by local authorities. China has been allowing them to issue more off-balance-sheet debt this year to pay for infrastructure.

With officials keen to offset the trade war’s impact on growth, fiscal stimulus is likely to continue, but the swelling deficit will eventually crimp their options.

“China has more fiscal space compared to many major economies. Fiscal support is likely to continue to play an important role in stabilizing growth in 2020. The government is seen to focus on infrastructure spending and implementing the tax cut plans announced this year.”– Chang Shu, Bloomberg Economics

Abe reiterated this week that he would deploy measures “without hesitation” if the economy is at risk from the tax increase and the global slowdown. Interest rates on government bonds are ultra-low, and the central bank hoovers up much of the debt anyway, so Japan arguably has plenty of scope to borrow.

That combination is cited by some economists, including modern monetary theorists, as an example of how governments needn’t fear borrowing more to support growth. Others say a shrinking and aging population means Japan isn’t in a position to borrow more.

“The Abe administration isn’t simply using the proceeds from the tax hike to rein in its budget deficit. It’s already earmarked all the extra revenue in the first year, to pay for free pre-school education or aid to the elderly. Even so, Prime Minister Shinzo Abe likely won’t hesitate to add extra stimulus if Japan’s economy looks set to fall into a technical recession.”

Germany, the poster child for budget rectitude in the euro region, faces increasing pressure to loosen purse strings and deploy its fiscal power for the benefit not only of its own sickly economy, but also those of its neighbors.

While the government is stepping up investments and actively considering measures from subsidies for electric cars to corporate tax write-offs, officials are not yet committed to wholesale action.

That’s because there’s been no consensus for stimulus in Germany, where fiscal surpluses are often seen as a mark of political virility — though there are signs that lawmakers from Chancellor Angela Merkel’s party may be softening their long-held commitment to the “black zero” of a balanced budget.

“Finance Minister Olaf Scholz has drawn up plans for fiscal stimulus, but only should the economic outlook take another turn for the worse. The risk is that this comes too late to stave off the most damaging impacts.”– Jamie Rush and Maeva Cousin, Bloomberg Economics

The Yellow Vest protests plunged Emmanuel Macron into the deepest political crisis of his presidency — and prodded him to unleash what now looks like prescient fiscal stimulus.

Tax cuts gave households a 17 billion euro shot in the arm this year, while business enjoyed a one-time boost from changes to tax credits.

But the government is switching tack in 2020, planning to trim public debt that’s already close to 100% of GDP. The national auditor has warned that Macron’s Yellow-Vest largesse leaves little room for maneuver in a deeper crisis. Paris has been reduced to pleading with Berlin to pick up the baton of fiscal stimulus in the euro area.

Italy: Not Much Room

Italy has been stretching European budget rules to their limits — but those rules ultimately mean that with its chronically low growth and high debt, the country doesn’t have much money to spare to stimulate the economy

Finance Minister Roberto Gualtieri’s main priority is to avoid a sales tax hike in 2020 that would depress demand. That will carry a 23 billion euro ($25 billion) price tag — and leave little room for anything else.

“The big risk now is that budget cuts required to avoid raising sales taxes drive a wedge between the two parties in Italy’s fragile coalition government. If that were to collapse, the Northern League’s Matteo Salvini would potentially rise to power and take the fight to Brussels over spending.”– Jamie Rush and Maeva Cousin, Bloomberg Economics

U.K.: Return of the Spenders?

IMF predictions may not capture recent developments in Britain — which point to a significant fiscal loosening, whoever wins the general election that’s widely expected to be called soon.

That would mark an about-turn for a country that’s been austerity-minded for much of the past decade. Back in March, forecasts showed a shrinking budget deficit, but now they’re pointing in the opposite direction — and the gap could widen even more if the U.K. crashes out of the European Union without a deal.

“The age of austerity in the U.K. is over. Johnson or Corbyn; no-deal or no Brexit — a loosening of fiscal policy in 2020 is a surefire bet. The current government recently gave a taste of what’s to come by announcing an extra 13 billion pounds (0.6% GDP) of spending next year. More giveaways are likely to follow in the upcoming budget.”–Dan Hanson, Bloomberg Economics

India has also announced budget easing in recent weeks, after Finance Minister Nirmala Sitharaman — whose July budget was fairly conservative — was confronted with growing evidence of a slowdown in the economy.

He responded with several fiscal measures to spur growth. The biggest was a surprise cut in corporate taxes last month that will cost $20 billion, a move aimed at encouraging investment. As a result, Fitch Ratings and other analysts now predict that the central government may miss its budget-deficit targets for the fiscal year through March.

South Korea, which has been running budget surpluses and has relatively little public debt, is now ramping up spending to support its export-dependent economy amid a global slowdown and trade tensions.

Finance Minister Hong Nam-ki said next year’s budget would be “as expansionary as possible.” It’s set to post a deficit for the first time since the global financial crisis — because the economy is probably growing at its slowest pace in that period.

Trade tensions have pummeled Korea’s exports, and last month consumer prices fell for the first time on record. “With the economic slump becoming prolonged, growth would be hit if the government just stood by,” said Shin Kwan-ho, an economics professor at Korea University in Seoul.

Mexicans elected Andres Manuel Lopez Obrador, or AMLO, by a landslide last year after he promised big changes to end decades of sub-par economic growth. But when it comes to fiscal policy, the left-leaning president has stuck with the cautious approach of his predecessors.

His government aims to run a primary surplus (before interest payments) of 1% of GDP this year, the biggest in a decade, and is willing to use a rainy-day oil fund to meet that goal if necessary.

That budget discipline, plus a real interest rate that’s among the world’s highest, has kept the peso steady. It hasn’t done much for the economy, which narrowly avoided a recession in the second quarter.

The government is seeking to clamp down on spending to fulfill pledges of cutting debt and strengthening public finances, though the effect is forecast to be gradual.

At the forefront of those plans is a pension reform that aims to save the government some 800 billion reais ($196 billion) over a decade. That proposal is poised for final approval in the Senate this month.

Still, the government’s budget plans have hit some headwinds. Sluggish growth is hurting tax income and policy makers are struggling to comply with a law that caps overall public spending increases. But even if deficit reduction proceeds more slowly than forecast, any bets on Brazilian fiscal stimulus are off.

If any country has room to add some stimulus, Russia has. After several years of tight budgets, and with the economy at a near standstill, the government is starting to ease the austerity.

The Finance Ministry expects the budget surplus to shrink this year, and it plans to keep accelerating investment into 2020. Mild stimulus is better than no stimulus, but it will take years of slow-burning reforms and investment to boost growth meaningfully, says Scott Johnson at Bloomberg Economics. Policy makers seem to recognize that.

To contact Bloomberg News staff for this story: Ben Holland in Washington at bholland1@bloomberg.net

To contact the editors responsible for this story: Simon Kennedy at skennedy4@bloomberg.net, Ben Holland, Robert Jameson

bloomberg.com” data-reactid=”121″>For more articles like this, please visit us at bloomberg.com