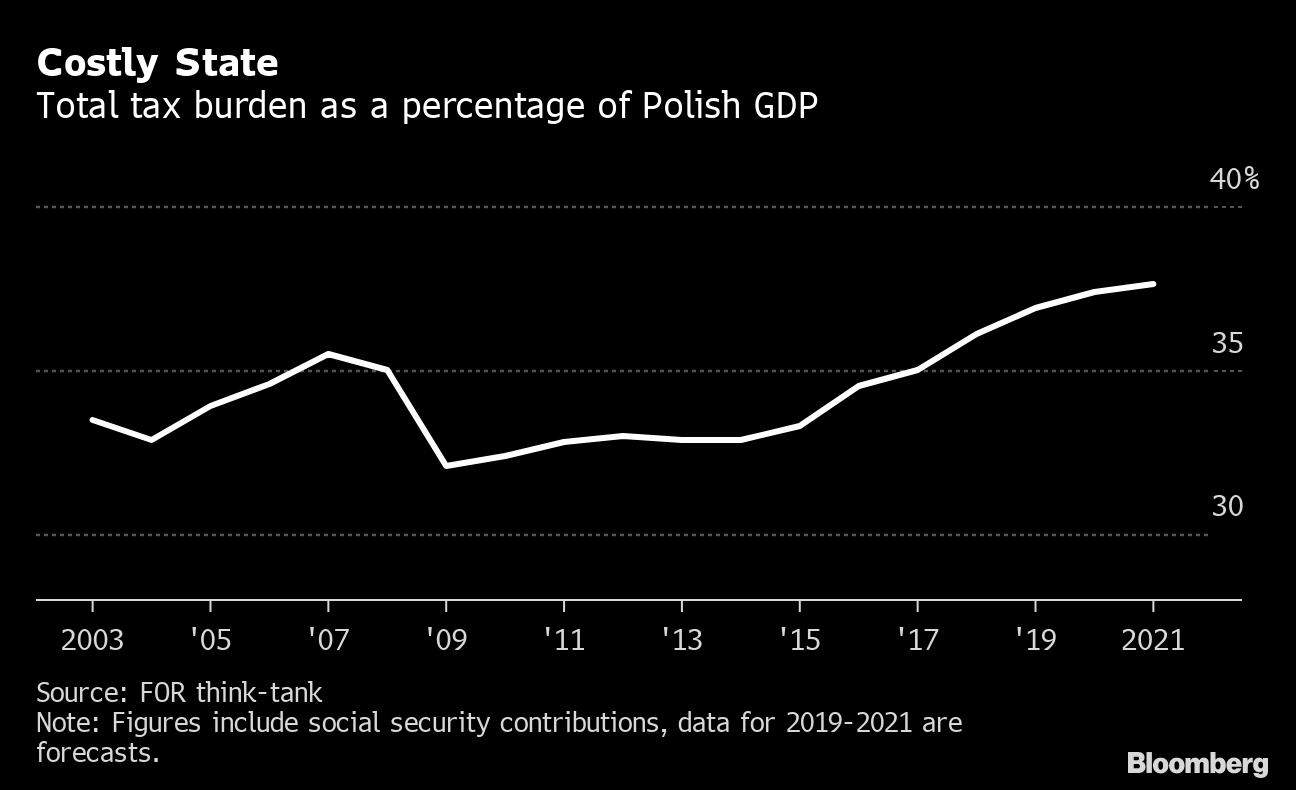 (Bloomberg) — For single mother Katarzyna Staszewska, the change of government in Poland four years ago meant her family got to splash in the sea for the first time.

Welfare payments introduced by the Law & Justice party allowed her to take her four kids on vacation to the Baltic coast, six hours away by car from their home in the southern city of Katowice in Silesia. She also bought them bicycles, signed them up for karate and dancing clubs and replaced the family clunker with a “more reliable” 15-year-old Opel.

Now Staszewska is planning to help Law & Justice win a second term in an election on Sunday. Prime Minister Mateusz Morawiecki has said the vote is Poland’s most important since breaking with communism because it will determine whether the sweeping overhauls of the past four years take hold. Opinion polls show the party is on course for victory again.

From the outside, the election looks like another culture clash between those allied to the European mainstream and the nationalist forces that have transformed Poland into a rogue from one of the continent’s most reliable partners. The government boosted control over the economy, the media and the courts and increased the influence of the Catholic Church, while the European Union has repeatedly sued the government for flouting the rule of law.

But Silesia, with pockets of poorer areas struggling with pollution, depopulation and the slow demise of mining, it’s viewed through a different lens. In Poland’s faded industrial heartland, it’s all about making ends meet, and like in the rust-belt states of the U.S. voting for Donald Trump or the former manufacturing regions of Brexit Britain, voters like Staszewska provide key support for a divisive political project.

“Worse-off people were invisible for almost three decades but thanks to Law & Justice, it’s no longer so,” said Staszewska, 39, an assistant at a school for children with disabilities in Katowice. “There’s a link between someone who can afford a bike and that young person’s dignity.”

Law & Justice, under the guidance of founder and leader Jaroslaw Kaczynski, has piled resources into winning Silesia, which traditionally voted with the pro-EU opposition.

Read More: The Plane Crash That Helped One Man Take Over a Nation

With a rich history drawing from Prussian and Austrian periods of domination, Silesia became a regional business hub during the industrial revolution. Its coal and steel then became the bedrock of communist development. The region, which is roughly the size of Connecticut, ethnically is still a rare mix in mainly homogeneous Poland.

But as unprofitable mines shut and industry moved out, some 500,000 people, or about 10% of the population, departed while the remains a black hole on European pollution maps.

A good showing in Silesia, which is allotted 55 of the 460 seats in Poland’s powerful lower house of parliament, will strengthen Law & Justice’s possible repeat majority. Morawiecki, who was handpicked by Kaczynski as premier in December 2017, is campaigning from Katowice and the city has enjoyed unusual perks, such as hosting a military parade.

“There are opinions that who wins Silesia, wins Poland,” said Tomasz Slupik, a political scientist at the University of Silesia in the city. “The campaign is simply the crowning of the remarkably populist Law & Justice agenda.”

Evidence shows policies are working, with a reduction in poverty, especially among children. The government has pumped 126 billion zloty ($32 billion) of new benefits directly into Polish wallets since 2016, equivalent to more than 5% of gross domestic product. To win a second term, it has pledged to build a “Polish welfare state” and nearly double the minimum wage over four years.

Read More: Has Poland’s Government Become a Threat to Business?

Business lobbies, meanwhile, have warned the spiralling wage costs could price them out of supply chains and crimp one of Europe’s fastest growing economies.

But investors have barely shrugged. Poland offers 1.9% yields on 10 years bonds, nowadays more than debt-ridden Greece. So far, the country’s budget has held up, boosted by improvements in tax collection and the consumption boom, although the World Bank warned this week that the welfare burden may soon inflate the deficit back to the EU’s limit.

Indeed, Law & Justice’s narrative is that the party is saving Poland from the clutches of the global elite. Another victory is the best chance Poles have to get their wealth levels up to the same as Germany over the next two decades, it says. Salaries in Poland are about a third of the EU average.

The government justifies its intrusion into more and more facets of Polish life—from sex education to management of museums—on the need to return the country to its traditional Catholic roots and have it run by public servants intent on sharing the nation’s wealth with ordinary citizens.

Public television news—watched by about 3 million viewers a day—has been ramming home the message: Poles have never had it better and they owe it to Law & Justice. Independent media watchdogs said the broadcaster has become a mouthpiece of the government, while private media has been facing harassment and dwindling advertising revenue from state-run companies.

Marlena Kudelska, a beautician from a town about 16 kilometers (10 miles) from Katowice, is happy with how Poland has changed. The new-found consumerism is boosting her small business as the welfare payments for families provide spending money for her clients.

Like for Staszewska, that outweighs concerns about the erosion of democracy, or indeed how the government has used religion as a political tool to exclude opponents, she said.

“There’s little freedom or justice for those without jobs, or working in humiliating conditions or those who get ripped off by their employers,” said Kudelska, 32. “How much money does a person need to feel free? Most people I know don’t need a lot, while most politicians never seem to have enough.”

“No wonder ordinary people want a slice of the pie for themselves,” she said. “That’s why we support Law & Justice.”

–With assistance from Barbara Sladkowska.

To contact the author of this story: Dorota Bartyzel in Warsaw at dbartyzel@bloomberg.net

To contact the editor responsible for this story: Wojciech Moskwa at wmoskwa@bloomberg.net, Rodney Jefferson