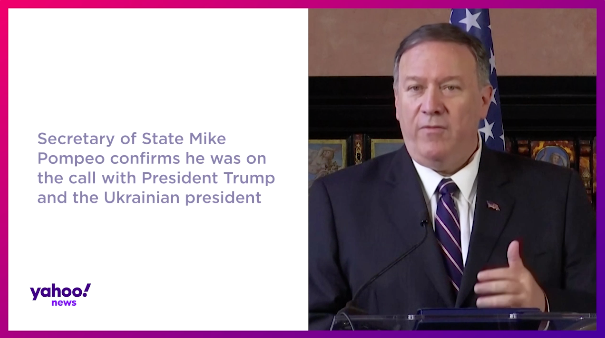 (Bloomberg) — U.S. Secretary of State Michael Pompeo confirmed he was on a call between President Donald Trump and his Ukraine counterpart, while denouncing a request from House committees to take testimony from five State Department officials.

“I was on the phone call,” Pompeo said in response to a reporter’s question during a three-day visit to Rome. His week-long European trip will take him to the Vatican, Montenegro and Greece besides Italy.

Pompeo’s admission and combative response to congressional Democrats thrust him even deeper into the House impeachment probe of Trump. A person familiar with the matter said earlier this week that Pompeo was among the U.S. officials listening on the July 25 conversation as Trump pressed Ukrainian President Volodymyr Zelenskiy to help investigate former Vice President Joe Biden and his son. The call is central to a House impeachment inquiry into Trump.

“What we object to was the demands that were put that deeply violate fundamental principles of separation of powers,” Pompeo said. “They contacted State Department employees directly. They told them not to contact legal counsel at the State Department. At least, that’s been reported to us.”

Pompeo said he had responded that “we will of course do our constitutional duty to cooperate, but we will do that in a way that is consistent with the fundamental values of the American system.”

Pompeo said the call was about American policy with respect to Ukraine, including “taking down the threat that Russia poses to Ukraine” and helping get “graft” and “corruption” out of the government there. Pompeo did not comment on a White House summary of the call.

Trump has ratcheted up his attacks on lawmakers pursuing a whistle-blower complaint, saying that it amounts to a “coup.” The president tweeted on Tuesday evening: “As I learn more and more each day, I am coming to the conclusion that what is taking place is not an impeachment, it is a COUP’.

Pompeo and Di Maio said their talks ranged over possible U.S. tariffs on European goods, Libya, with both appealing for a cease-fire, Iran and concerns about Chinese threats to national security over 5G telecommunications technology.

Italy has emerged as one of Trump’s strongest allies in Europe, with the president tweeting his support for Prime Minister Giuseppe Conte during fraught negotiations this summer that led to the formation of his second cabinet.

“We should continue to stand united against Iranian aggression,” Pompeo said. Di Maio echoed that both agreed that “the solution is to favor de-escalation” adding that this “does not mean being neutral.”

(Added background on Pompeo’s involvement with inquiry in third paragraph.)

–With assistance from Chiara Albanese and Kathleen Miller.

To contact the reporter on this story: John Follain in Rome at jfollain2@bloomberg.net

To contact the editors responsible for this story: Ben Sills at bsills@bloomberg.net, Alessandro Speciale, Karl Maier

bloomberg.com” data-reactid=”34″>For more articles like this, please visit us at bloomberg.com