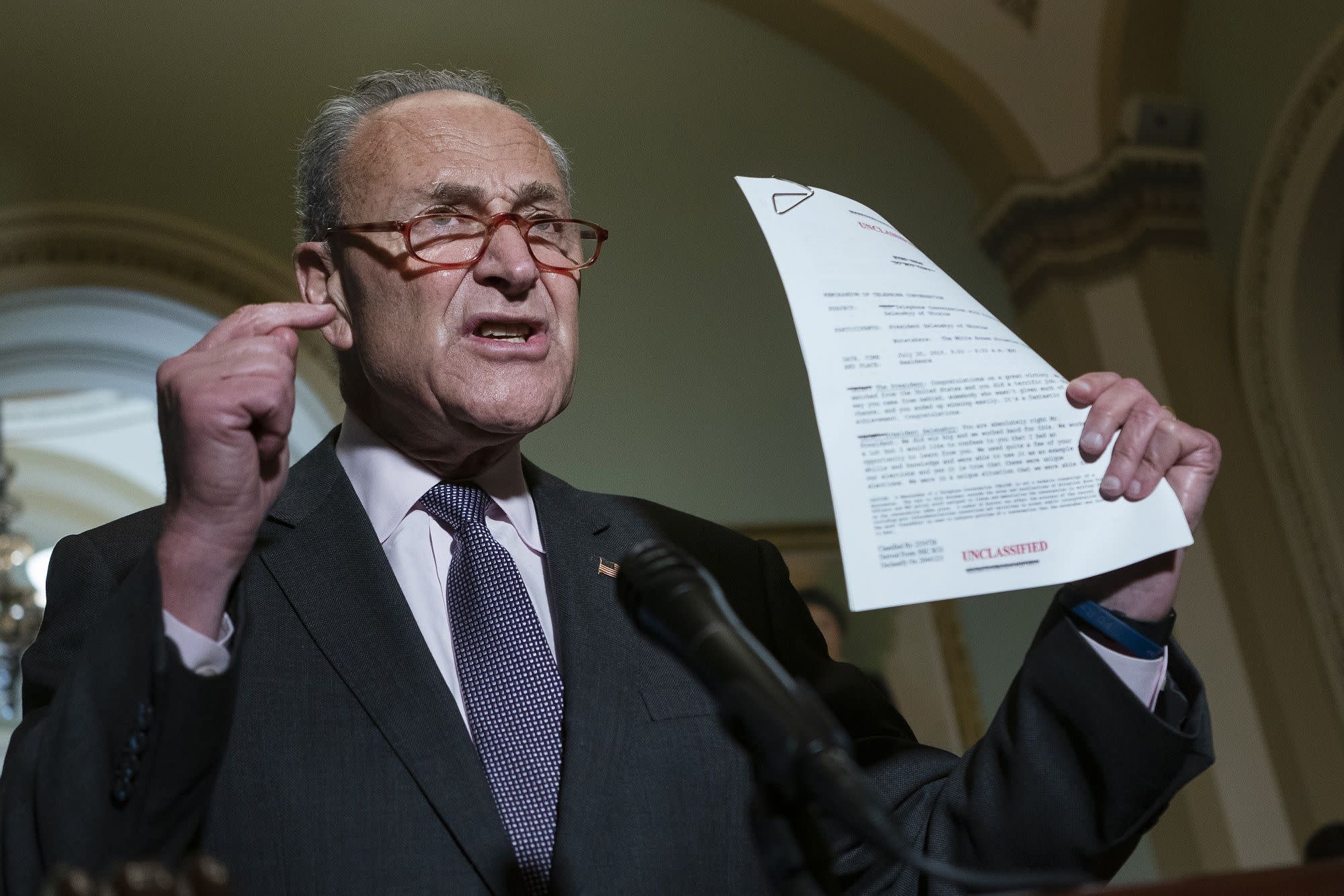 (Bloomberg) — Donald Trump tried to squelch the latest threat to his presidency with the release of a transcript of his call with Ukraine’s president. It’s a trick that’s worked for him before, allowing him to claim exoneration and take the attack to Democrats.

Yet this time, the gambit backfired. Trump didn’t anticipate that, even in the absence of an explicit quid pro quo, his transactional approach to foreign policy and willingness to solicit political help from another country — laid bare in a five-page transcript — would embolden his critics and fan the flames of a nascent impeachment inquiry.

The president maintains the supreme belief he can talk his way out of any tight spot. But his own words in the transcript provided an easy road-map for Democratic foes who accuse him of abusing the power of his office. In the call, Trump repeatedly implores Ukraine’s Volodymyr Zelenskiy, whose country is heavily dependent on U.S. aid, to help him smear former Vice President Joe Biden, who at the time was the clear Democratic frontrunner.

“There’s a lot of talk about Biden’s son, that Biden stopped the prosecution and a lot of people want to find out about that so whatever you can do with the Attorney General would be great,” the transcript quotes Trump as saying.

Some Democrats say those words clearly show an impeachable abuse of power and grounds for an impeachment query, even if Trump didn’t explicitly link the investigation to military aid. Trump, however, dismissed the complaints as a “joke” and much ado over “a wonderful phone conversation.”

The impeachment fight now turns to the House, where the acting director of national intelligence will appear before a committee at 9 a.m. Thursday to discuss the complaint filed by an unidentified whistle-blower.

Republicans who have rallied to Trump’s defense in the past now face a choice of how closely they can stick with him this time around. As the party began to shape its rebuttal — that Trump did nothing that rises to the level of impeachment — three GOP senators stepped forward to express their misgivings about his actions.

At a news conference on Wednesday, Trump questioned the information from the unnamed administration official, noting that it was based on second-hand information. But he insisted: “I fully support transparency on the so-called whistle-blower.”

Moreover, the White House signaled it would allow the whistle-blower to meet with Democratic lawmakers on Capitol Hill, and has already privately transmitted the written complaint to lawmakers ahead of the hearing featuring acting Director of National Intelligence Joseph Maguire.

The president’s willingness to cooperate with the probe — and his assertion that the media is “corrupt” and complicit with Democrats — indicated that the transcript release hadn’t had its desired impact.

Trump and his allies had initially claimed total vindication, gleefully noting there was no explicit offer of U.S. assistance in exchange for a Ukrainian investigation into Biden, and that the president at no point mentioned his days-earlier decision to freeze hundreds of millions of dollars in military aid.

A Justice Department review of Trump’s conduct found no criminal behavior or violation of election law. The call’s contents fell far short of early media reports that Trump harangued Zelenskiy eight times for an investigation, or made a promise to the Ukrainian leader in exchange for his cooperation.

As if to underscore the winning hand Trump thought he held, a dozen Republican lawmakers were invited to the White House to review the transcript with White House counsel Pat Cipollone before its release. The White House sent talking points suggesting lawmakers argue the “real scandal” was false accusations carried in media accounts. The White House spin was mistakenly sent to some Democratic lawmakers.

Even before the release of the transcript, the Trump campaign was trying to raise money off the controversy.

“I’ve done nothing wrong. Trust me, you saw the transcript,” the Trump fundraising email said. In a subsequent tweet, campaign manager Brad Parscale said $5 million has been raised in the 24 hours since House Speaker Nancy Pelosi announced the impeachment inquiry.

Earlier in Trump’s presidency, as investigations unfolded into ties between his campaign and Russia, Trump benefited from partial disclosures of information — particularly when speculation of wrongdoing has outpaced the facts at hand.

His son, Donald Trump Jr., preempted a report about meetings he tried to set up with a Kremlin-connected lawyer by tweeting an email exchange with publicist Rob Goldstone in which he says he would “love” incriminating material about Hillary Clinton — lessening the impact of the revelation.

Attorney General William Barr’s summary of Special Counsel Robert Mueller’s report allowed the White House to celebrate findings that the investigation had discovered no evidence of attempted collusion between the Trump campaign and Russia weeks before the full report was released. The final document included accounts of presidential efforts to interfere with the investigation.

‘I Can’t Push Anyone’

In the Ukraine episode, Trump not only asked Zelenskiy during the July call to “look into” the former vice president and his son, but suggested he do so in concert with his personal lawyer, Rudy Giuliani, and Barr. And while Trump didn’t explicitly link assistance to the Biden investigation, he repeatedly said the U.S. “has been very, very good to Ukraine.”

Moreover, Trump responded to Zelenskiy’s interest in purchasing new military equipment by asking him “to do us a favor,” and search for information hacked from a Democratic National Committee server ahead of the 2016 election. Trump disparaged the “performance” of Mueller’s Capitol Hill testimony, and appeared gracious when Zelenskiy tried to ingratiate himself by noting a recent stay at a Trump property in New York.

The problematic ambiguity of the call was apparent as Trump and Zelenskiy met Wednesday in New York on the sidelines of the United Nations General Assembly. The Ukrainian leader took pains to say he couldn’t pressure independent prosecutors in his country and didn’t want to be involved in American elections, even as Trump appeared to again encourage an examination of the Bidens.

“We have an independent country,” Zelenskiy said, speaking non-native English. “I can’t push anyone. That is the answer,” he said, adding “I didn’t ask him. I didn’t push him.”

Trump followed up by saying he applied “no pressure” on Zelenskiy.

The response from Democrats was not the muted resignation that followed the release of the Mueller report, which found no evidence the Trump campaign colluded with Russia, but instead righteous indignation.

Clinton tweeted her support for impeachment and accused the president of betraying the nation. House Intelligence Committee Chairman Adam Schiff said he was “shocked” by a call that proved worse than he thought it would be, saying the dialogue was “how a mafia boss talks.” Pelosi accused Trump of trying to “shake down other countries for the benefit of his campaign.”

“The president has tried to make lawlessness a virtue in America and now is exporting it abroad,” Pelosi said.

Even moderate Democrats from swing districts and states reluctant to back an impeachment inquiry issued statements critical of Trump’s conduct. Senator Joe Manchin, a West Virginia Democrat, said that while he still thought talk of impeachment was premature, “any allegation of misconduct with a foreign country must be investigated.”

Still, while the episode may have unified Democrats and produce tough headlines for the president, the transcript likely didn’t do enough to spur Republican defections.

Republican allies noted that a Justice Department investigation concluded that Trump didn’t violate campaign finance laws in the course of the call, and that intelligence whistle-blower didn’t have first-hand knowledge of the conversation. The intelligence community’s inspector general also said there was some indication the person has a “political bias” in favor of one of Trump’s political rivals.

And while Senator Mitt Romney said the Ukraine situation “remains deeply troubling,” most Republicans jumped to the president’s defense. Rob Portman, an Ohio Republican, told reporters it would have been better if Trump hadn’t mentioned Biden’s name but said it doesn’t rise to the level of an impeachment and overturning an election. Pat Toomey of Pennsylvania said that the conversation was “inappropriate” but “does not rise to the level of an impeachable offense.”

“If you are underwhelmed by this transcript, you are not alone or ‘crazy,’” Senator Lindsey Graham, a South Carolina Republican, said Wednesday. “Those willing to impeach the president over this transcript have shown their hatred for President Trump overrides reason.”

–With assistance from Chris Strohm and Billy House.

To contact the reporter on this story: Justin Sink in Washington at jsink1@bloomberg.net

To contact the editors responsible for this story: Alex Wayne at awayne3@bloomberg.net, Justin Blum, John Harney

bloomberg.com” data-reactid=”86″>For more articles like this, please visit us at bloomberg.com