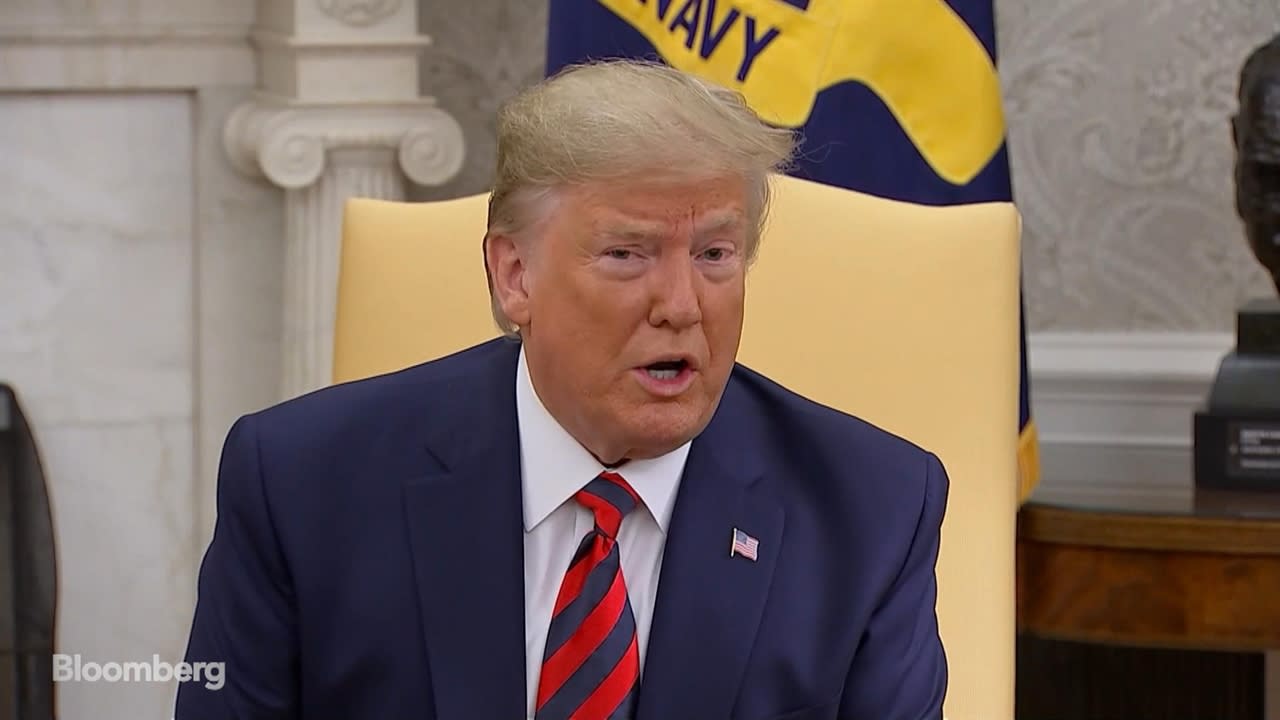 (Bloomberg) — The fight over a mysterious intelligence whistle-blower complaint is shining new attention on Democratic accusations that Donald Trump has improperly implored the Ukrainian government to investigate one of the president’s main political opponents — Democratic presidential front-runner Joe Biden.

Trump held a phone call on July 25 with Ukraine’s new president, where he pressed Volodymyr Zelenskiy to investigate Biden’s son, according to a person familiar with the call.

The whistle-blower from the intelligence community, who hasn’t been publicly identified, raised concerns about Trump’s interactions with a foreign leader. The complaint includes references to Trump’s phone call with Zelenskiy, according to the Washington Post.

Biden condemned the reports and called on Trump to release the transcript of the Zelenskiy phone call and stop blocking information about the whistle-blower.

“It means that he used the power and resources of the United States to pressure a sovereign nation — a partner that is still under direct assault from Russia — pushing Ukraine to subvert the rule of law in the express hope of extracting a political favor,” Biden said Friday in a statement. “Such clear-cut corruption damages and diminishes our institutions of government by making them tools of a personal political vendetta.”

Trump dismissed the controversy as partisan, saying on Saturday that the Democrats and news outlets had fabricated “a story about me and a perfectly fine and routine conversation” with Zelenskiy. “Nothing was said that was in any way wrong,” he said on Twitter.

Trump has said he didn’t know the details of the complaint.

“It’s just another political hack job,” the president said at the White House on Friday when asked about his conversation with Zelenskiy. “It doesn’t matter what I discussed, but I’ll tell you this, somebody ought to look into Joe Biden’s statement.”

The Zelenskiy call, which came one day after Special Counsel Robert Mueller testified to Congress about his investigation into Trump and Russia’s meddling in the 2016 election, has prompted Democrats to accuse the president of seeking help from a foreign country for his 2020 re-election bid.

“If this isn’t impeachable abuse of power, what is?” Democratic Representative Jared Huffman wrote Friday on Twitter. “I’m sick of the parsing, dithering & political overcalculating. We are verging on tragic fecklessness. Time to do our job!”

The fight by Democrats for access to the whistle-blower complaint has provoked the latest clash between congressional committees pursuing investigations of Trump and his administration and a White House that largely refuses to cooperate.

Michael Atkinson, the intelligence community’s inspector general, told the House Intelligence panel in a closed-door briefing Thursday that the whistle-blower’s complaint focused on a specific sequence of events, according to a person in the room. Atkinson wouldn’t say whether those events involved Trump.

Three congressional committees are investigating whether Trump withheld military aid to Ukraine as leverage to reopen an investigation into a company linked to Biden’s family. Trump didn’t directly link the two issues in the July phone call, but pressed Ukraine’s president to work with Rudy Giuliani, Trump’s personal lawyer, on the probe, the Wall Street Journal reported.

The committees began their investigation in June after news reports about Giuliani’s activity in Ukraine, according to an official on one of the panels.

Giuliani said Thursday night on CNN that he urged the Ukrainian government to investigate corruption, “and I’m proud of it.” He said he didn’t know whether Trump had talked to Ukraine’s president about the issue but even if so “it doesn’t mean a damn” that a president would inquire about evidence of corruption.

“I don’t know if he did, and I wouldn’t care if he did,” Giuliani said. “He had every right to do it if he was the president of the United States.”

Ukraine’s prosecutor general said in May that he had no evidence of wrongdoing by Joe Biden or his son, Hunter Biden, who sat on the board of one of the country’s biggest gas companies. In addition, Vitaliy Kasko, a former deputy prosecutor who pursued the case against the gas company’s owner, told Bloomberg in May that there had been no U.S. pressure to close the case.

On Saturday, Trump made reference to Biden’s alleged “demand that the Ukrainian Government fire a prosecutor who was investigating his son, or they won’t get a very large amount of U.S. money.”

Representative Adam Schiff, chairman of the House Intelligence Committee, has accused Trump administration officials of improperly withholding information about the complaint from congressional investigators, and he warned Trump that Congress would protect the whistle-blower.

Schiff and three other Democratic committee chairmen said in a statement Friday that Trump’s attack on the whistle-blower as a “political hack job” contradicts the inspector general’s conclusion that the allegations raise an “urgent concern.” The lawmakers said Trump’s “brazen effort to intimidate this whistle-blower risks a chilling effect on future whistle-blowers, with grave consequences for our democracy and national security.”

A next step in the whistle-blower investigation is set for Sept. 26, when Acting Director of National Intelligence Joseph Maguire is scheduled to testify publicly before the House Intelligence panel after initially resisting demands to do so. Maguire is also expected to meet at some point next week with the Senate Intelligence Committee.

Jason Klitenic, the general counsel of the Office of the Director of National Intelligence, had told Schiff in a letter on Tuesday that the law didn’t require that the complaint be turned over to Congress based on guidance by the Justice Department.

Trump earlier Friday denied any wrongdoing and accused the whistle-blower of being “highly partisan,” without substantiation.

The dispute comes as Trump is weighing how to respond to an attack on Saudi oil facilities that U.S. officials have blamed on Iran. It became public during the same week that Trump selected a new national security adviser, Robert O’Brien, after ousting John Bolton.

(Updates with Trump comments on Twitter in sixth paragraph, details on prosecutor in 18th paragraph.)

bloomberg.com” data-reactid=”49″>For more articles like this, please visit us at bloomberg.com