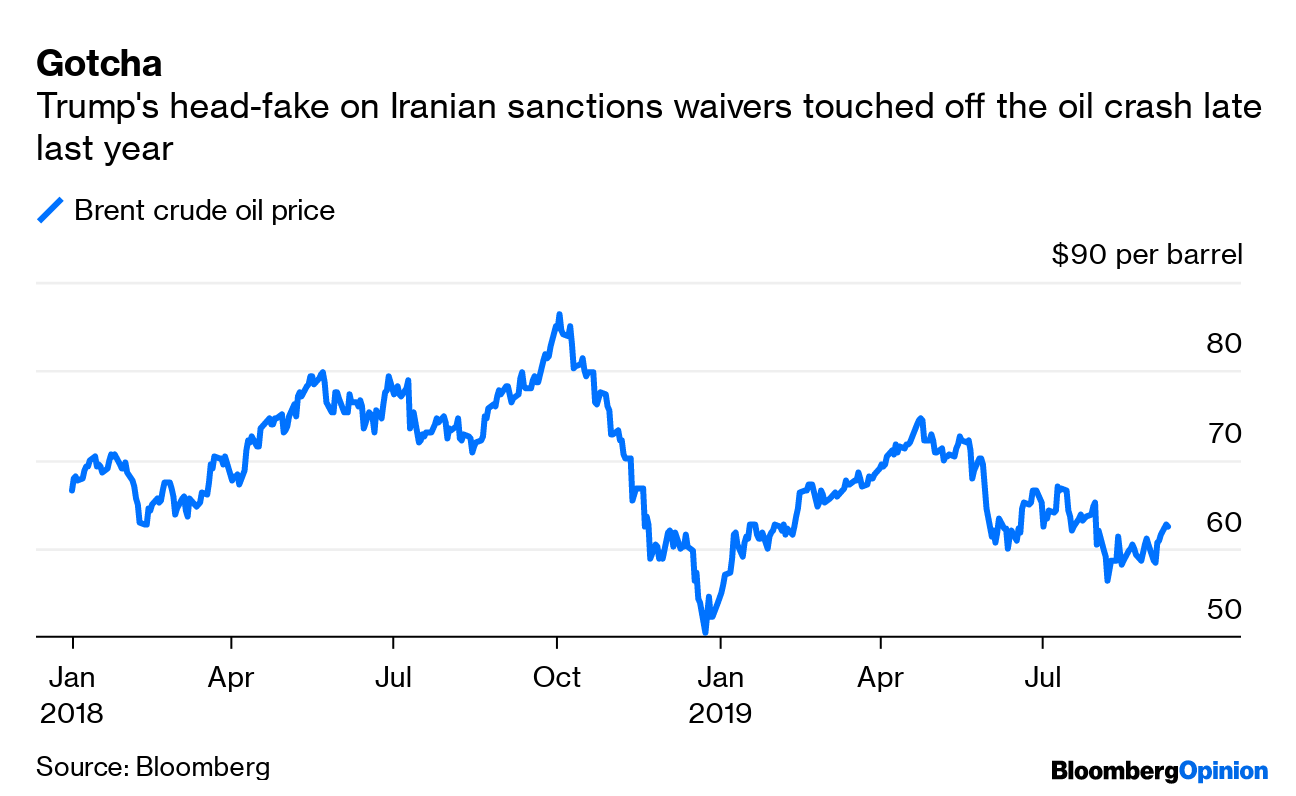 (Bloomberg Opinion) — So, about John Bolton. To paraphrase another tragic character, nothing became the ex-national security adviser’s tenure quite like the leaving it. Sudden, tweeted and disputed – an all-too-familiar three-act play in the theater of Trump.

Oil had a little hiccup on Tuesday’s news, dropping by roughly a buck a barrel. The uncharitable, if rather obvious, conclusion to draw is there was a Bolton premium of one princely dollar, which is rather disappointing from one perspective, I suppose. It is also too simplistic and rather misses the point.

It’s tempting to conclude, or at least speculate, that the departure of the highest-profile Iran hawk from President Donald Trump’s administration signals a softer policy toward the country. That line of reasoning would suggest possibly higher Iranian oil exports. Given how important their absence has been to supporting oil prices, that would be a cue to sell.

The truth is, though, we have no idea yet who will replace Bolton. Plus, while it was no secret he had clashed repeatedly with Trump on several fronts, the president’s ambivalence toward Iran predates Bolton’s arrival. Certainly, the current context of tightening sanctions – most recently against individuals and assets associated with the Islamic Revolutionary Guards Corps – creeping nuclear escalation and the occasional explosion around the Persian Gulf don’t appear to portend peace breaking out.

Rather than Bolton, the individual oil investors should worry about here is his ex-boss. Trump has just lost his third national security adviser. And Bolton, remarkably, has had the longest stint so far, despite not even making it to 18 months. Trump sprung this upon the world – and Bolton, too, if he is to be believed – with the usual twin-thumbed tact. Forget the dismissed man and focus on the incumbent agent of chaos.

Recall that the drop in oil prices that ended 2018 had its roots in the president’s head-fake about Iran last summer. Oil prices rose, as did production, including from Saudi Arabia, in expectation of imminent curtailment of Iranian exports. Then worries about the impact of higher pump prices on November midterms led to Trump issuing waivers for several importers of Iranian barrels. Oil’s summer turned to fall with unseemly haste.

Almost a year after the peak in 2018, who can say the oil market is on surer footing now? There’s a certain pointlessness to debating the significance of Bolton’s exit for oil because the one thing the market can rely on now is that it can’t rely on anything. The U.S. has become a force for disruption, not stability.

Beyond the intrigues of foreign policy, there’s the impact of the ongoing trade war to consider. The International Oil Agency just cut its demand growth forecast for 2019 to one million barrels a day, which would be the weakest since 2014, when the oil crash began. Will China and the U.S. strike a deal? Your guess is as good as mine, but the important thing is that we’re all just guessing at this point. If hostilities continue into 2020 and the threat of an election-year recession looms, then the one forecast we can probably count on, now that even the weather outlook is compromised, is a heightened chance of erratic behavior.

And this is the real problem for oil, as well as the companies who produce it. There is just precious little incentive to hold oil futures or E&P stocks in an environment where demand looks shaky and the administration’s positions even more so.

To contact the author of this story: Liam Denning at ldenning1@bloomberg.net

To contact the editor responsible for this story: Mark Gongloff at mgongloff1@bloomberg.net

This column does not necessarily reflect the opinion of the editorial board or Bloomberg LP and its owners.

Liam Denning is a Bloomberg Opinion columnist covering energy, mining and commodities. He previously was editor of the Wall Street Journal’s Heard on the Street column and wrote for the Financial Times’ Lex column. He was also an investment banker.