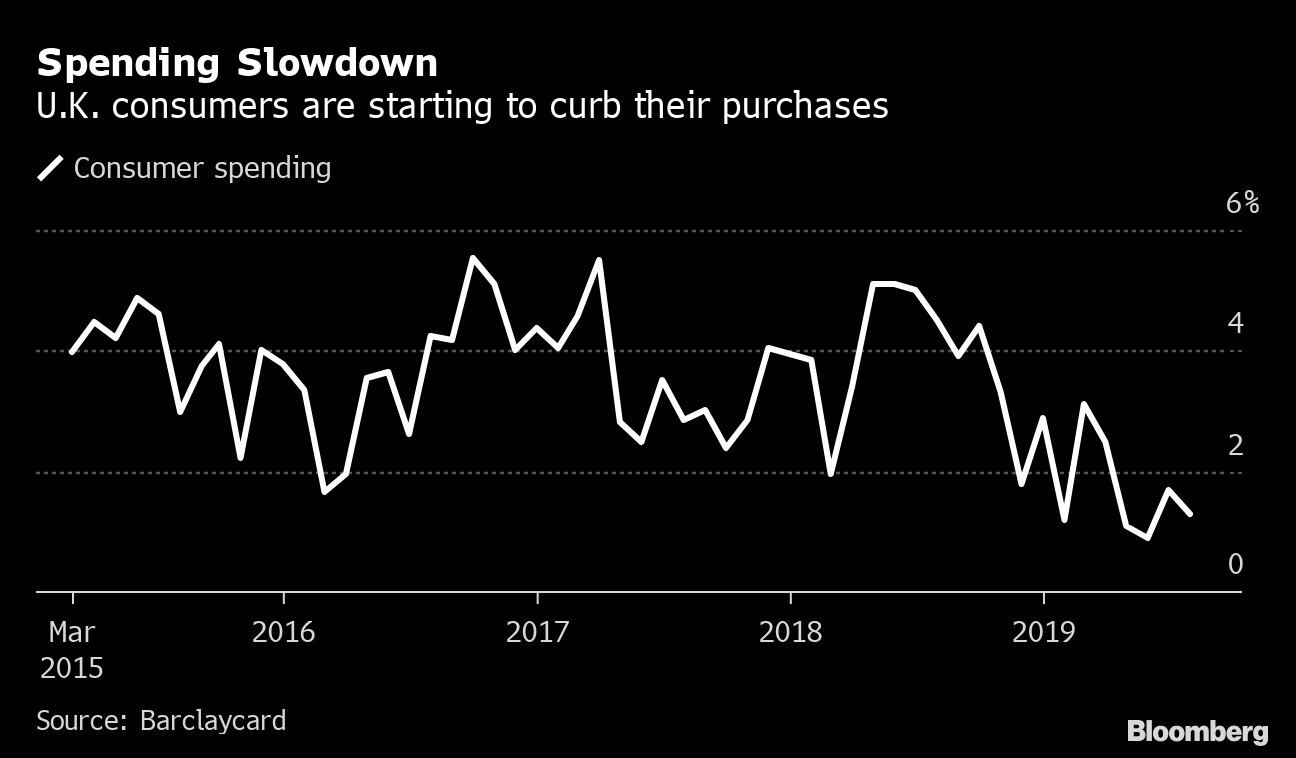 Behind the noise of another tumultuous few days in U.K. politics, the nation’s economy quietly had one of its worst weeks this year.

Warning lights are flashing red, with manufacturing and construction shrinking and even the dominant services sector losing momentum, prompting forecasts that the U.K. is heading for a recession.

At the same time, the housing market is stuck in a rut, retail sales are disappointing and shoppers are worried that Brexit will push up prices.

This week has done little to lift the fog after Prime Minister Boris Johnson suffered a series of defeats, lost his Parliamentary majority and failed in a bid to force early elections. While the U.K. public was gripped by the political drama, including photographs of one lawmaker slouched in his House of Commons seat during a crucial Brexit debate, the reports highlight the economic cost of the chronic uncertainty surrounding Britain’s departure from the European Union.

“The economy is rusting up quite visibly in the data,” said Kit Juckes, chief global foreign-exchange strategist at Societe Generale. “It’s just getting slowly worse, there’s no momentum to anything.”

A report Monday will give an early indication of how likely an imminent recession is. After contracting 0.2% in the second quarter, the economy probably grew just 0.1% in July. A weaker reading could prompt economists, who currently see a bounce back in the third quarter, to start downgrading their outlooks.

Still, movements in the pound this week highlighted that traders are glued to political, not economic, news. On Tuesday, the currency slipped below $1.20 for the first time since 2017. Then, the passing of an opposition bill reducing the risk of no-deal Brexit subsequently gave sterling its best week since June.

Despite all that, the U.K.’s future is far from certain — and the economy looks in an increasingly fragile state.

Even before the latest political turmoil, confidence among households was crumbling. A Bank of England survey on Friday showed that inflation expectations for the coming year stand at 3.3%, with over half of Britons saying that Brexit would push prices up. Inflation is currently just over 2%.

Businesses are also taking a hit. A report Monday showed manufacturing and construction shrinking last month, while services came close to stalling. If consumers start to tighten their belts, the economy’s problems will deepen. Retail industry figures this week showed sales fell in August from a year earlier, a third drop in four months.

According to Schroder economist Azad Zangana, households didn’t cut their spending as expected after the 2016 EU referendum. Instead they saved less and “ate into their safety buffer.”

“Now we’re in a situation where savings rates are near record lows,” he said. “If we get no deal and the pound falls again and inflation picks up, we’ll definitely go into recession.”

Amid the gloom, the U.K. economy got two potential boosts this week. First, Chancellor of the Exchequer Sajid Javid on Wednesday promised to end a decade of austerity with the biggest boost to government spending for 15 years. The same day, Bank of England Governor Mark Carney said the U.K.’s preparations for a no-deal Brexit may help to limit the economic hit, though the fallout will still be considerable.

“If you look through the underlying trend, our judgment is that the economy is growing very weakly,” Carney said. “Slightly positive, but close to zero.”

–With assistance from Francine Lacqua and Harumi Ichikura.

To contact the editors responsible for this story: Fergal O’Brien at fobrien@bloomberg.net, Andrew Atkinson

bloomberg.com” data-reactid=”64″>For more articles like this, please visit us at bloomberg.com