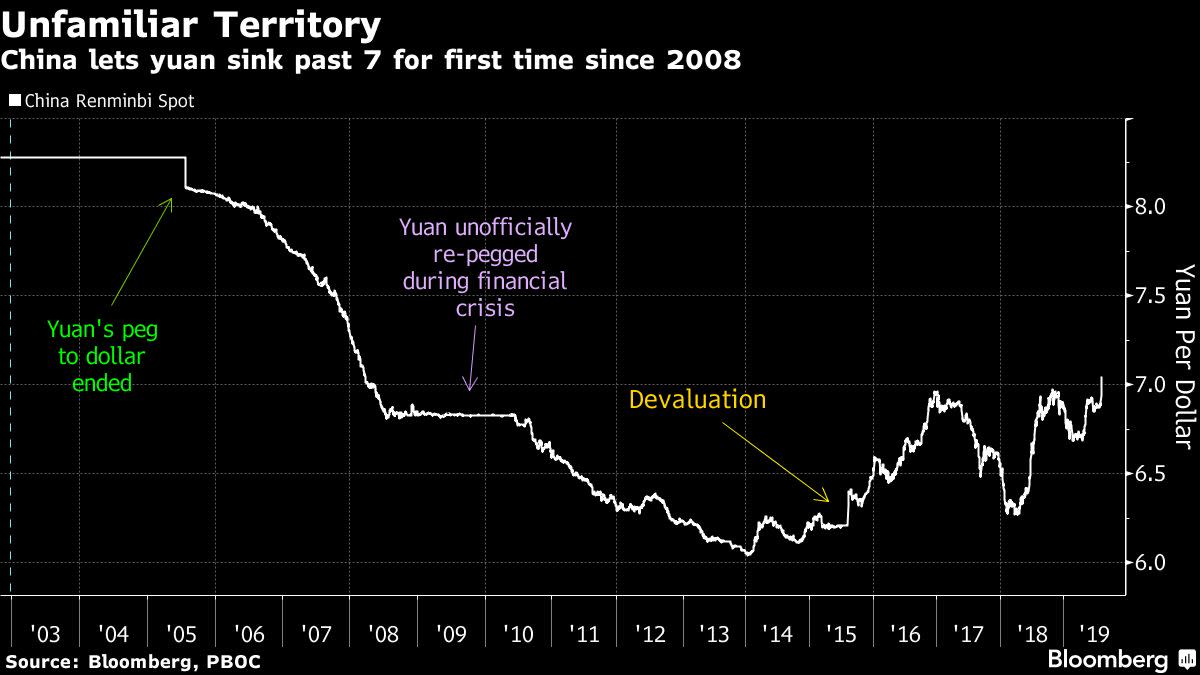 When Xi Jinping first met Donald Trump back in 2017, the Chinese leader said they had “a thousand reasons to make the China-U.S. relationship a success, and not a single reason to break it.”

Two years on, ties are at their lowest point in decades — and they appear to be worsening by the day. Trump’s threat to raise tariffs on all Chinese goods last week shattered a truce reached with Xi just weeks earlier, unleashing tit-for-tat actions on trade and currency policy that risk accelerating a wider geopolitical fight between the world’s biggest economies.

A big part of the problem is that neither leader believes the other is serious about making a deal: China sees Trump as posturing ahead of the 2020 election, while U.S. officials think Xi is looking to wait him out for a better deal. Either way, the political space for compromise is diminishing as hardliners take center stage, prompting investors to weigh the potential economic fallout.

“We are looking at a situation now that is a bit of a perfect storm,” said Dennis Wilder, former senior director for Asia on the National Security Council who is now at Georgetown University. “Both have a great deal to lose in this high-stakes poker.”

For Trump, the bet is that a hard-line stance on China will help him win another four years in the Oval Office. His administration has proudly trumpeted what it calls the most robust response in decades to a rising China, and most Democratic candidates agree with the need to stay tough on Beijing even if they don’t agree with Trump’s tariffs.

While U.S. farmer and business groups have sounded the alarm over his latest escalation of trade tensions, the Federal Reserve’s interest-rate cut last week — and the prospect of more to come — may give Trump some breathing space. And the president tweeted Tuesday that he’d support a fresh round of aid to farmers hurt by tariff increases, if necessary.

The political calculations for Xi are harder to grasp, given the secretive nature of the Communist Party. But analysts say he’s under pressure from senior leaders currently meeting in the seaside town of Beidaihe to get tougher as U.S. ties deteriorate, corporate giant Huawei Technologies Co. comes under attack and protests in Hong Kong spiral out of control.

China’s move on Monday to let the currency weaken past 7 yuan to the dollar and halt agricultural purchases marked a stark escalation in its response to Trump, which had been restrained for months. His administration labeled Beijing a currency manipulator in return.

“It is unlikely China will buckle to any further pressure as they are convinced dealing with the current U.S. administration means give them an inch and they want a foot,” said Charles Liu, a former economic negotiator with the Chinese delegation at the United Nations and founder of Hao Capital. “There does not seem to be serious interest from the U.S. side of actually wanting to do a deal.”

The U.S. has a much different version of events.

People within and close to the administration blame China’s own hawks for scuttling key parts of a trade agreement in May, and say Xi failed to live up to promises to step up agriculture purchases after the leaders met almost six weeks ago at the Group of 20 summit in Japan. They insist Trump’s threat of new tariffs last week was meant to bring China back to the negotiating table, and Beijing’s retaliation showed Xi didn’t want to reach a deal and would try to wait out Trump.

To some U.S. hawks, the breakdown in relations could provide an opportunity to tighten restrictions on Huawei, follow through on selling F-16 fighter jets to Taiwan and signal support for Hong Kong protesters. The U.S. has indicated it will base intermediate-range missiles in Asia — something China warned against Tuesday — and potentially take further action against Chinese students and scientists.

“Both sides are clearly looking at their tool kits to see how to respond both in terms of the underlying issues — that is, trade and technology — and from what the political optics are at home and abroad,” said James Green, who until recently was the senior official from the U.S. Trade Representative in Beijing and is now a senior adviser at McLarty Associates.

Xi, meanwhile, still has plenty of ammunition to use against Trump. He could take punitive action on U.S. business interests in China, undermine American efforts to isolate Iran and North Korea, and even take more drastic measures to block U.S. companies from recently opened sectors like finance.

Even so, Xi must be cautious to ensure any retaliation doesn’t backfire. A weaker yuan is a case in point: China doesn’t want to risk surging capital outflows like those that took place in 2015, which drained hundreds of billions of dollars from foreign-exchange reserves. The risk of defaults would also grow for companies with dollar debts.

“As we saw in 2015, if the expectation is destabilized, capital outflows would surge again and it will cause more harm than tariffs,” said Larry Hu, head of China economics at Macquarie Securities Ltd. in Hong Kong.

Despite the guardrails, the potential for miscalculation is high. Some former U.S. officials who worked on China trade issues said the administration overestimated its own leverage by refusing to gradually remove tariffs in exchange for reforms, a move that some see as leading to China’s move to pull back from talks.

For the business community, the threat of greater escalation is particularly worrying. Both nations must sit down and reach a deal that is as close as possible to reciprocity, said James McGregor, China chairman of APCO Worldwide, which advises foreign companies.

“The path forward will be dangerous and ugly if both sides don’t get out of the ring and move to a negotiating table,” he said. “This is real life — not a reality show.”

To contact the editors responsible for this story: Daniel Ten Kate at dtenkate@bloomberg.net, Brendan Murray

bloomberg.com” data-reactid=”72″>For more articles like this, please visit us at bloomberg.com