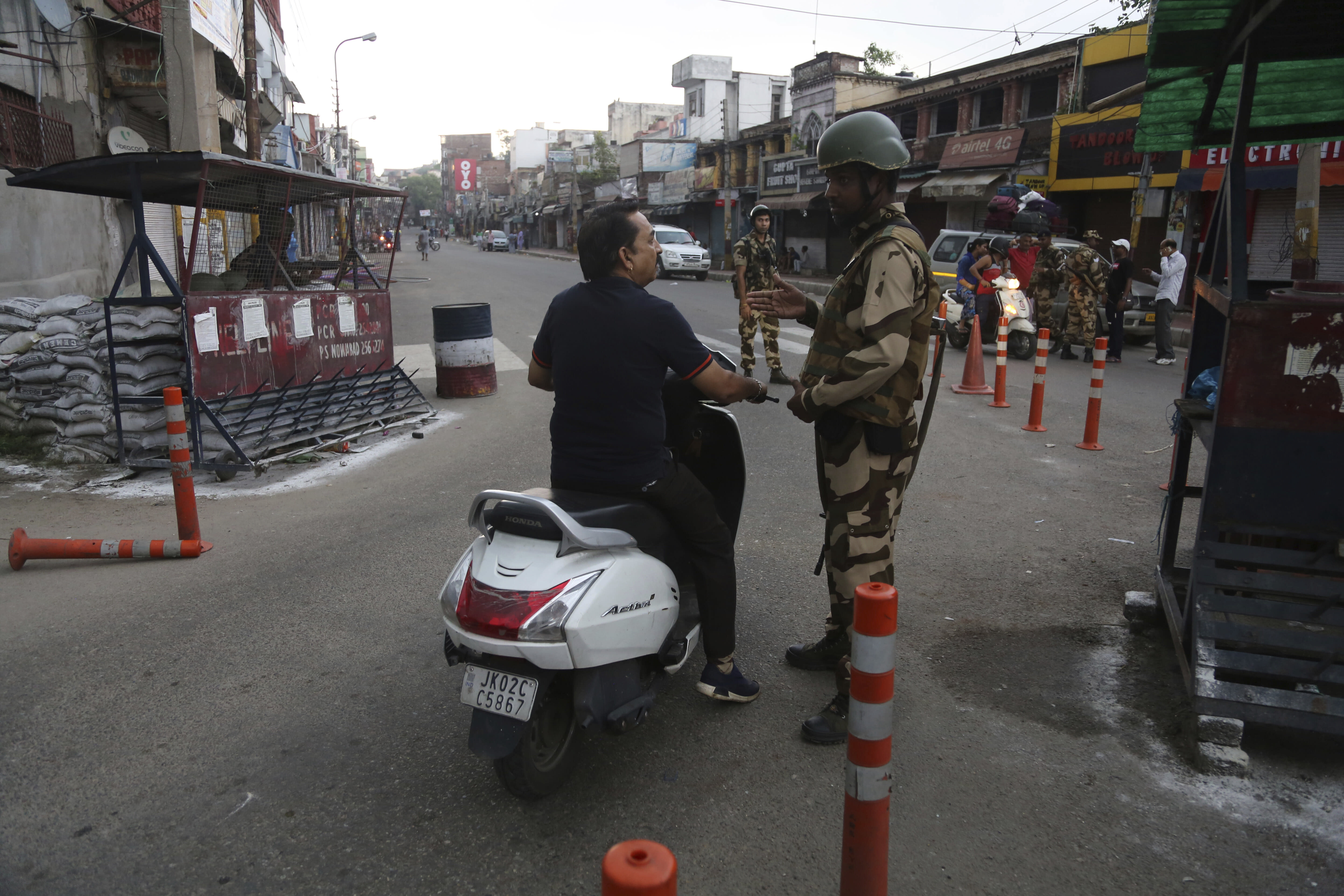 An Indian paramilitary soldier stops a commuter during curfew like restrictions in Jammu, India, Monday, Aug. 5, 2019. An indefinite security lockdown was in place in the Indian-controlled portion of divided Kashmir on Monday, stranding millions in their homes as authorities also suspended some internet services and deployed thousands of fresh troops around the increasingly tense region. (AP Photo/Channi Anand)

Pakistan’s foreign ministry has rejected India’s revocation of a special status for the portion of disputed Kashmir that it controls.

The ministry said in a statement Monday that under U.N. Security Council resolutions India cannot change the status of Kashmir, which is claimed by both countries.

It said the people of Pakistan and Kashmir will not accept the Indian action, and that Pakistan will “exercise all possible options” to block it.

On Monday, India scrapped a constitutional provision that gave the state of Jammu and Kashmir its own constitution and broad decision-making rights.

Foreign Minister Shah Mahmood Qureshi told a Pakistani TV station Monday from Saudi Arabia, where he’s on a pilgrimage to Mecca, that Pakistan would step up diplomatic efforts to prevent the revocation made by presidential order from coming into effect.

The order scraps an Indian constitutional provision that forbids Indians from outside the region from buying land in the Muslim-majority territory.

The president of Pakistan-controlled Kashmir, Sardar Masood Khan, also rejected India’s presidential order and said that India “can go to war” with Pakistan in such a situation.

India’s government has initiated a revocation of the special constitutional status of disputed Kashmir amid uproar in Parliament and a huge troop deployment in the region.

Home Minister Amit Shah told members of the upper house Monday that the government has decided to repeal a law that gives special status to the Himalayan region of Jammu and Kashmir by presidential order. Shah says that the government has also decided to split the state into two union territories — Jammu and Kashmir, which will have a legislature, and Ladakh, which will be ruled directly by the central government without a legislature of its own.

Kashmir is divided between India and Pakistan and both claim the region in its entirety.

An indefinite security lockdown is in place in the Indian-controlled portion of divided Kashmir, with thousands of newly deployed soldiers camping in police stations and government buildings around the increasingly tense region.

The deployment in recent days adds at least 10,000 troops in Kashmir, already one of the world’s most militarized regions.

India also has ordered thousands of tourists and Hindu pilgrims to leave.

The measures have sparked fears that New Delhi is planning to scrap a constitutional provision that forbids Indians from outside the region from buying land in the Muslim-majority territory.

Kashmiris fear the measures would be a prelude to doing away with the region’s special status and intensifying an ongoing crackdown against anti-India dissenters.