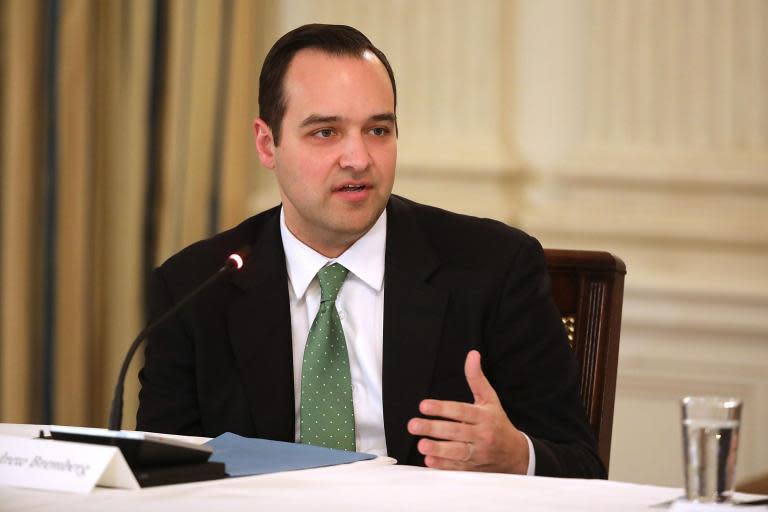 Human Rights Watch has called for the US Senate to reject Mr Bremberg’s nomination to be US ambassador to the United Nations in Geneva – saying his views on women’s rights are at loggerheads with international human rights law.

The organisation joined 38 other groups in a letter urging members of the US Senate Foreign Relations Committee to reject his nomination. His nomination was scheduled for a vote last week but has now been rearranged for this coming Wednesday.

Campaigners warn Mr Bremberg, who serves as assistant to Mr Trump and is the director of the Domestic Policy Council for the White House, has demonstrated in his confirmation hearing and written responses that he will not uphold women’s sexual and reproductive rights.

“Bremberg has made clear that he does not support reproductive rights even in instances of rape, when a pregnancy can be especially traumatic,” Amanda Klasing, acting women’s rights co-director at Human Rights Watch, said.

“The senate should not send to the United Nations someone holding the dangerous view that women’s rights can be slashed away from fundamental human rights.”

She added: “Americans are entitled to expect that their top representatives to the United Nations will engage constructively, uphold international law, and be a voice for all Americans. Andrew Bremberg’s stated positions indicate that he will be none of those things.”

The US representative to the UN in Geneva is responsible for representing America on over 20 UN agencies, including the UN Office of the High Commissioner of Human Rights.

Mr Trump reinstated the policy – also known as the global gag rule and which dates back to the Reagan administration – on his fourth day in office. It requires foreign non-governmental organisations (NGOs) that receive US family planning funds to certify they do not provide abortions or give abortion advice.

A damning report by the International Women’s Health Coalition found the controversial measure is having a “devastating impact” in Kenya, Nigeria, Nepal and South Africa – depriving women of their right to make choices about their bodies, and effectively killing them.

“This deadly policy violates the rights of patients and ties the hands of providers,” Francoise Girard, president of the women and girls’ human rights organisation, said.

“After two years of implementation, the impact is clear: the global gag rule reduces access to contraceptives and abortion care, leading to unwanted pregnancies, unsafe abortions, and preventable deaths.”

Research has demonstrated the global gag rule is associated with an increase in abortions and unintended pregnancies and is damaging HIV prevention efforts.

This position is out of step with current American policies – even under Mr Trump’s expanded global gag rule and under the Hyde Amendment, which prevents federal funding for abortions domestically, exceptions are made in instances where sexual violence has occurred.

The Hyde Amendment is a legislative provision barring the use of federal funds to pay for abortion except to save the life of the woman, or if the pregnancy arises from incest or rape.

Shelby Quast, director of the US branch of Equality Now, an NGO which aims to promote the rights of women and girls, condemned Mr Bremberg’s nomination.

“America has historically positioned itself as a leader in human rights globally and his appointment would undermine this by putting women and girls wellbeing at risk,” she added. “Human rights must be protected and cannot be allowed to be caught up in party politics.”

“The consequences of sexual violence often includes pregnancy and denying the most vulnerable access to the full range of health care causes huge harm, including death. All of us who support women’s rights must stand firm against these erosions against hard-won gains that protect women and girls.

“We all need to focus our resources and energy on protecting women and girls from sexual violence and ensuring perpetrators are held accountable, not denying women access to healthcare and their rights.”

As co-chair of the Department of Health and Human Services transition team, Mr Bremberg filled the agency with those who are opposed to abortion.

Andrea Prasow, acting Washington director at Human Rights Watch, said: “Bremberg’s views on abortion are completely out of touch with those of most Americans, and with international law. Americans deserve a representative in Geneva who will seek to uphold international law both at home and abroad, and if Bremberg won’t do that then he shouldn’t be confirmed.”

Planned Parenthood tweeted: “The Trump admin continues to nominate anti-rights players to critical diplomatic positions, jeopardizing women’s and human rights protections. E.g. Andrew Bremberg, nom for US Ambassador to UN in Geneva, who opposes abortion even in cases of rape”.