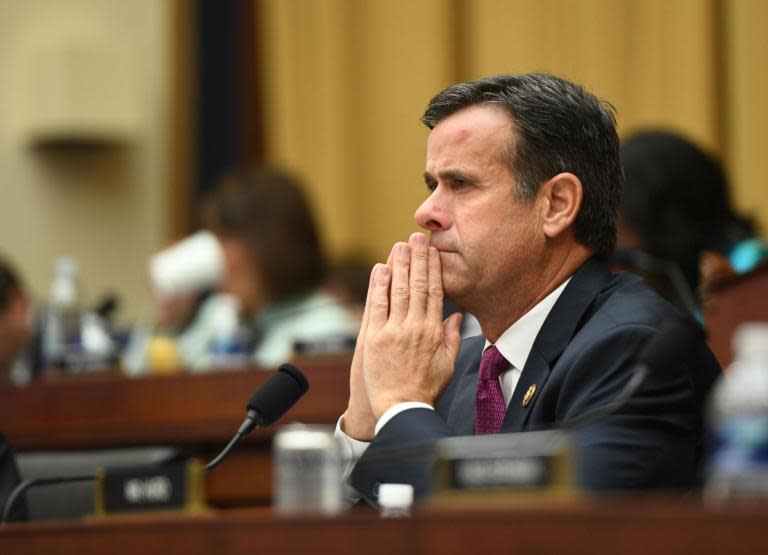 The president said Dan Coats, a long time fixture of the Republican intelligence establishment, would be standing down as director of national intelligence, a position created in the aftermath of the attacks of 9/11 to coordinate the 17 US intelligence agencies.

In his place, the president will nominate Republican congressman John Ratcliffe, from Texas, who is said to have little experience of dealing with the intelligence world.

“I am pleased to announce that highly respected congressman John Ratcliffe of Texas will be nominated by me to be the director of national intelligence. A former US attorney, John will lead and inspire greatness for the country he loves,” he tweeted on Sunday.

“Dan Coats, the current director, will be leaving office on August 15th. I would like to thank Dan for his great service to our country.”

Reports said the president had been impressed by the way Mr Ratcliffe recently defended him during one of the recent congressional hearings, at which former special counsel Robert Mueller testified.

Mr Coats, 76, a former senator, had clashed with the president over their differing views on Russia. Mr Coats was of the view that Moscow, which allegedly interfered in the 2016 presidential election, remained a danger to the US; Mr Trump took a different perspective.

The most public display of their differences played out last summer, when Mr Trump and Vladimir Putin held a press conference in Helsinki. During the event, Mr Trump appeared unwilling to challenge Mr Putin over Russia’s alleged interference.

Asked whether he believed Russia had interfered, Mr Trump said: “All I can do is ask the question. My people came to me, Dan Coats came to me and some others, they said they think it’s Russia. I have president Putin; he just said it’s not Russia.”

He added: “I will say this, I don’t see any reason why it would be.”

Mr Coats issued a statement the same day which said: “The role of the intelligence community is to provide the best information and fact-based assessments possible for the president and policymakers.”

“Say that again. Did I hear you?,” Mr Coats asked his interviewer, NBC’s Andrea Mitchell.

Mr Coats will join a long list of senior officials to leave the administration since Mr Trump took office in January 2017, either through resignation or firing. The list includes a defence secretary, attorney general, two national security advisers, a secretary of state, an FBI director, numerous top White House officials and assorted other cabinet members.