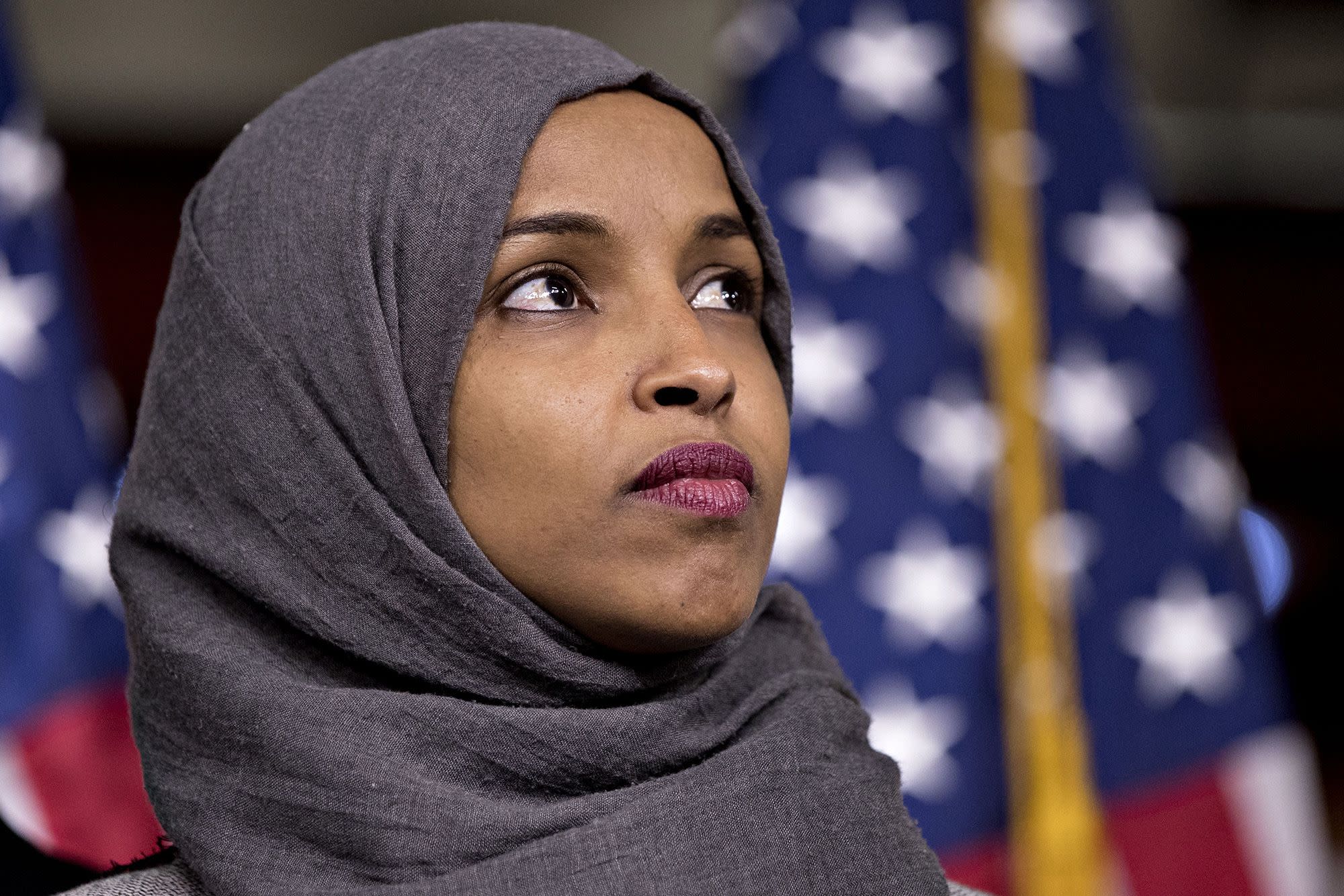 (Bloomberg) — At a political rally sometime in the coming weeks, Donald Trump will almost certainly be met again with a chant rising from an auditorium packed with boisterous supporters: “Send her back!”

In that moment Trump will have to choose a course. He could turn to the crowd and deliver an unambiguous condemnation, telling his supporters that they shouldn’t persist with a slogan — directed at a Somali-born U.S. representative from Minnesota — that many critics called racist. Or, Trump could pause, as he did during a rally in Greenville, North Carolina, last week, and let the chant build in volume, perhaps offering only a winking condemnation that frees his fans to make it the 2020 version of “Lock Her Up.”

It’ll be an early test of the president’s willingness to tolerate the more extreme elements of his base as he ramps up his bid for a second term. Last week, faced with bipartisan backlash, Trump first tried to distance himself from — then later signaled support for — a rallying cry that even some loyal backers said risked crossing the line into racism.

Trump’s next rally is expected to be in Cincinnati later this month, about the time the 2020 Democratic candidates hold their second round of debates. That could briefly take the spotlight off a president who likes his tweets to soar like rocket ships.

If the past is prologue, Trump may again recoil at suggestions that he admit fault. He’s also someone who sees politically correct outrage, particularly on issues of race, as a dividing line between the timid establishment and the masses who propelled him to the White House.

Already on Friday, Trump seemed disinclined to entertain questions of why he objected to the chant, which echoed a Twitter attack he penned more than a week ago against Somali-born Representative Ilhan Omar and three other minority congresswomen.

When a reporter in the Oval Office sought to ask whether Trump, who’d just a day earlier said he was “unhappy” with the chant, also regretted his tweets, the president interrupted.

Omar has been previously accused of employing anti-Semitic tropes as she criticized U.S. support for Israel, and administration officials looking to sidestep questions about the president’s words have focused on those comments, as well as fellow “Squad” member Alexandria Ocasio-Cortez’s description of detention facilities on the southern border as “concentration camps.”

“It minimizes the death of six million of my Jewish brothers and sisters, it minimizes their suffering, and it paints every patriotic law enforcement officer as a war criminal,” senior Trump adviser Stephen Miller told Fox News on Sunday. “And those are the comments that we need to be focusing on.”

Other top officials couldn’t say beyond a doubt whether Trump would intervene if a similar chant broke out at another event.

“If it happened again he — he might — he might make an effort to speak out about it,” Vice President Mike Pence said in an interview with CBS that aired on Sunday.

The president has run this playbook before. In July 2016, Trump said he “didn’t like it” when a group of speech attendees began chanting “Lock her up!” in reference to Democratic presidential candidate Hillary Clinton. “I think it’s a shame that they said it,” Trump said during a press conference in Florida.

But “Lock her up!” became a staple of the future president’s campaign events, with Trump often pausing theatrically whenever he mentioned Clinton’s name to allow the chant to begin, and to build in volume. Trump himself went on to suggest imprisoning Clinton during one of the nationally televised presidential debates.

In that vein, Trump may go on to contend that he’s less offended by the chant about Omar than by things he’s heard freshman Democrats or others say about his White House, the nation, or allies like Israel. The president’s aides were out in force on Sunday drawing a distinction between Trump’s previous criticisms of the U.S. — done “out of love,” according to Miller — and those by people like Omar and Ocasio-Cortez.

Trump showed little patience for sticking to a condemnation in the aftermath of the violence in Charlottesville in 2017. The president’s original response to the white nationalist march in the Virginia college town was widely panned for only criticizing hatred, bigotry and violence “on many sides.”

The president relented to pressure two days later at the White House, declaring that “racism is evil” and singling out “the K.K.K., neo-Nazis, white supremacists and other hate groups” as “repugnant.”

But as reporters continued to press the president in the following days, Trump turned defensive again and blamed individuals on “both sides” for the violence that left a counter-protester dead at the hands of a man with neo-Nazi beliefs.

Top Republicans and some members of the president’s Cabinet publicly criticized his handling of the episode. By earlier this year, though, Trump had a different recollection: he said he “answered perfectly” in his remarks about the racially charged clash.

Trump has adopted a similar pattern with other major controversies. His acceptance of Russian President Vladimir Putin’s denial of interference in the 2016 presidential election during a summit in Helsinki last year sparked a firestorm, with even commentators on the normally supportive Fox News network seemingly aghast.

Trump eventually issued statements insisting that he’d misspoken, and that he retained confidence in the U.S. intelligence community, which had determined that Russia sought to interfere. In the following days, though, Trump tweeted that “many people at the higher ends of intelligence loved my press conference performance” and dismissed critics as “haters.”

In the end, the president may simply be banking on his belief that he’ll win more support by appearing unbending to criticism than by seeking a middle ground.

A USA Today-Ipsos poll found that while 68% of Americans who were aware of the president’s attacks on the four first-term congresswomen — Omar, Ocasio-Cortez, Ayanna Pressley of Massachusetts and Rashida Tlaib of Michigan — a majority of Republicans supported the criticism.

Separately, a survey from the Economist showed that members of the self-described “Squad” were more unpopular among Republican voters than any of the Democratic presidential candidates, with Ocasio-Cortez disliked by three-quarters of those who cast a ballot for Trump in 2016.

For the president, elevating the far-left congresswomen in stature to the point that attendees at his political rallies are familiar with their every action might be worth the accusation of racism, even though it may further alienate those outside his base.

That calculus appeared to be on the president’s mind during a long weekend at his golf club in New Jersey, as he weighed in to praise those who attended the contentious rally in North Carolina.

“I did nothing to lead people on, nor was I particularly happy with their chant,” Trump wrote, retweeting a post by Katie Hopkins, an English media personality known for her anti-Islamic views. “Just a very big and patriotic crowd. They love the USA!”

Trump has a model in the Republican Party for framing disagreements with opposition candidates in terms of policy, not personality or race — his long-time nemesis Senator John McCain.

Many recalled how McCain, running for the White House against Barack Obama in 2008, corrected a woman during a town hall meeting in Minnesota who said she couldn’t “trust” Obama, whom she called “an Arab.”

“No, ma’am,” McCain replied. “He’s a decent family man, citizen, that I just happen to have disagreements with on fundamental issues.”

To contact the reporter on this story: Justin Sink in Washington at jsink1@bloomberg.net

To contact the editors responsible for this story: Alex Wayne at awayne3@bloomberg.net, Ros Krasny, Steve Geimann

bloomberg.com” data-reactid=”83″>For more articles like this, please visit us at bloomberg.com