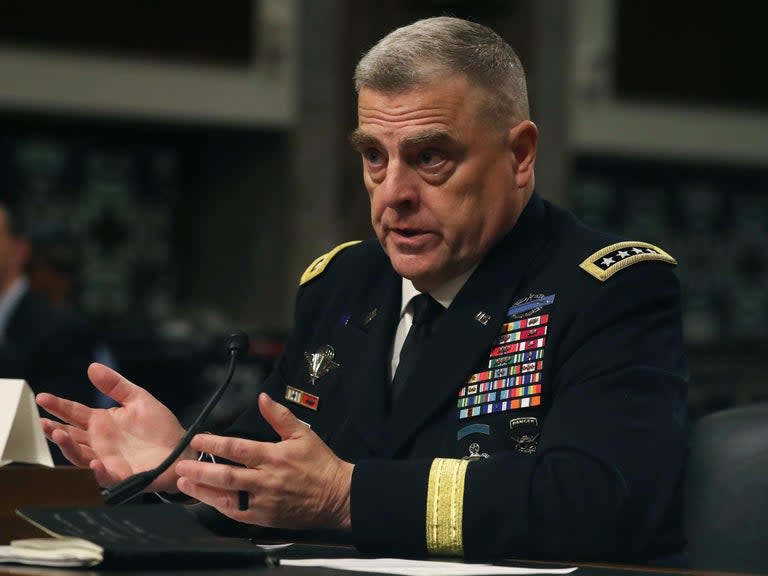 If confirmed, General Milley would replace Marine General Joseph Dunford Jr as chairman of the Joint Chiefs of Staff this autumn.

Senator Angus King asked General Milley if he would challenge the president, who since his 2016 election has questioned decades-old defence alliances and taken positions that have caused discomfort within the military highest ranks.

In response to the general’s vow to remain independent, Mr King said: “I believe that. But I think it’s very important to emphasise that the Oval Office is an intimidating place, and the president of the United States is the most powerful leader in the free world.”

He added: “To be willing to say ‘Mr President, you’re wrong about this’ … if it’s something that she or he doesn’t want to hear is just, there is no more important responsibility in your career.”

General Milley replied that Marine General Dunford and “most of us” have seen a lot of combat.

“Arlington is full of our comrades, and we understand absolutely full well the hazards of our chosen profession,” General Milley said, referring to the national cemetery a few miles away in Virginia where many US service members are buried.

“We know what this is about, and we will not be intimidated into making stupid decisions,” he said. “We will give our best military advice and not keep the consequences to ourselves.”

General Milley, a gruff infantry officer educated at Princeton, became the Army’s top officer in August 2015 after serving in Iraq, Afghanistan and other countries.

It’s not clear how Mr Trump, who appears to have gained confidence in his instincts on foreign policy as his presidency has gone on, would take to being challenged by General Milley.

This week, officials unveiled a plan for installing the Defence Department’s third acting secretary this year, as federal personnel rules require acting defence secretary Mark Esper – who has been serving as General Milley’s civilian counterpart leading the Army since 2017 – to step aside while SASC considers whether to confirm him for the top Pentagon job.

The nominee to become Joint Chiefs vice chairman, Air Force General John Hyten, faced questions about whether he will be confirmed following a revelation on Wednesday that he has been investigated for an alleged sexual assault.

Finally, General David Berger took over as the new commandant of the Marine Corps on Thursday.

Speaking during a brisk hearing in which no senator raised questions about his credentials, General Milley echoed other Pentagon leaders in affirming that China posed a threat to US military superiority.

He said the international order that emerged after World War II was “under the most stress since the end of the Cold War“.

“From East Asia to the Middle East to Eastern Europe, authoritarian actors are testing the limits of the international system and seeking regional dominance, while challenging international norms and undermining US interests,” he said.

Much of General Milley’s job as chairman will involve tending to America’s military alliances as the president, who has espoused a transactional view of those relationships, questions their value.

General Milley must also navigate his duty to execute the commander in chief’s orders while mitigating the impact of internally unpopular decisions, such as the initiative to use military funds to pay for Mr Trump’s border wall.

Privately, senior officers have also voiced concern that the involvement of active duty troops in a mission designed to stem migration at the southern border will detract from the military’s core mission.

Responding to questions from Senator Mazie Hirono, General Milley said he would resign if he was asked to carry out an order that was “illegal, immoral or unethical”.

Amid recent tensions with Iran, General Milley said the US withdrawal from the 2015 nuclear deal had complicated Washington’s ability to build a coalition to confront Tehran’s steps to challenge US interests and allies in the region.

He said he did not expect war with Iran.

Mr Trump has called the S-400 issue “complicated” and said the US is “looking at different solutions”.

General Milley also said he would recommend deploying land-based missiles to the Pacific if the United States proceeds with its planned withdrawal from the Intermediate-Range Nuclear Forces (INF) treaty, a Cold War-era pact the Trump administration says Russia is violating.