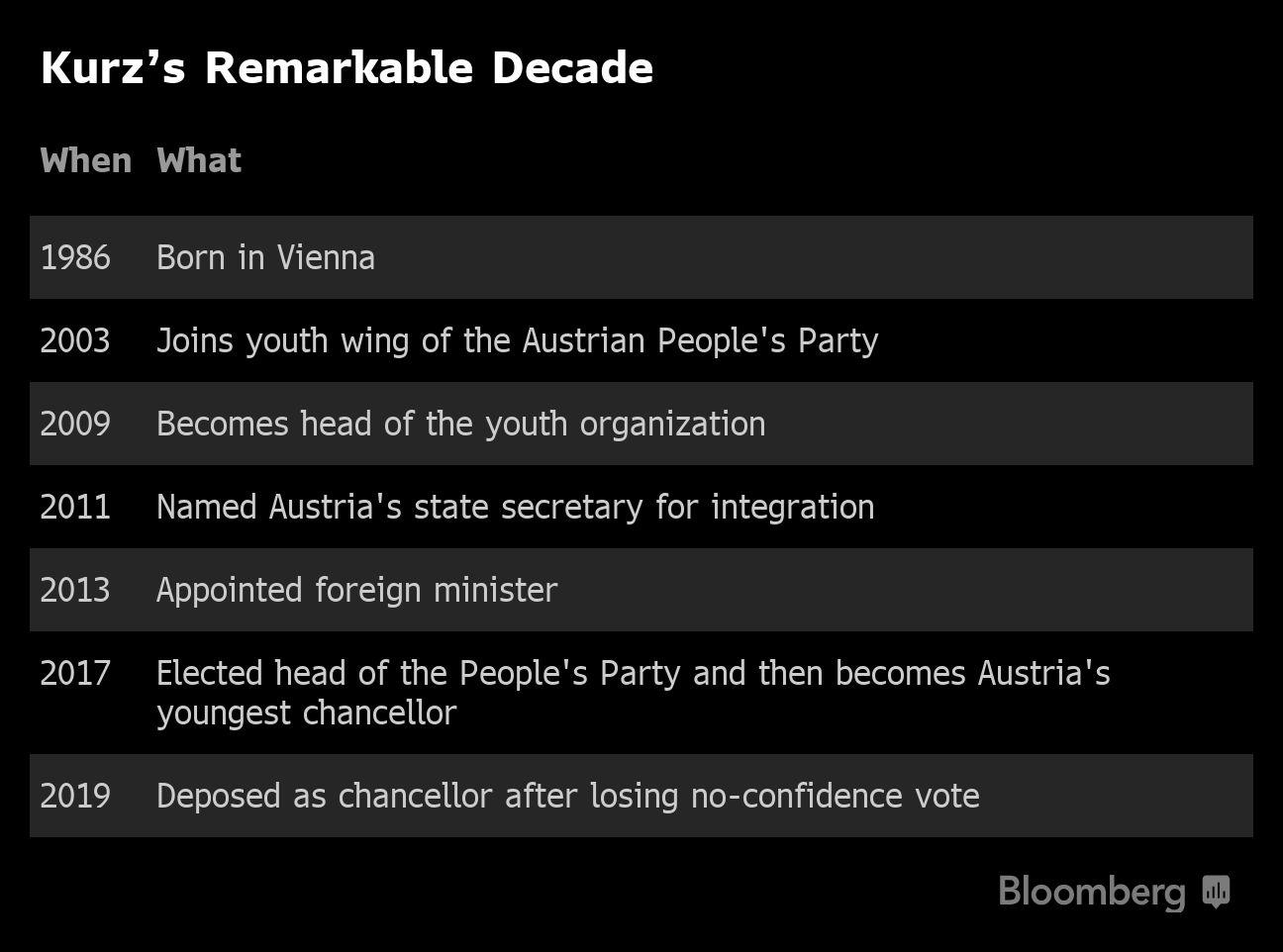 (Bloomberg) — When Sebastian Kurz was an aspiring politician barely out of his teens, Austrian establishment grandees offered him some wise words: If you want to make it to the top, remember you’re always in the public eye. He took the advice.

“While others were partying until the morning light, Sebastian always knew when it was enough,” said Philipp Depisch, 39, an ally of Kurz from the early 2000s. “When we went to the bar, he organized a round of drinks for everyone and stayed for a while, but at some point he would get up and go to bed.”

Such attention to his persona helped put Kurz on a breakneck journey to become Europe’s youngest head of government less than a decade later. Now the next few months will decide whether the 32-year-old can morph from youthful curiosity into a European statesman and affirm his role as the pragmatic new face of the continent’s conservative forces.

Kurz heads into an election campaign with scrutiny never higher after a scandal involving his far-right coalition partner brought an end to his 18-month stint as Austrian chancellor in May. A solid victory could make him a power broker at home and in the fractious European Union as German Chancellor Angela Merkel prepares to step down.

Combining a hard line on uncontrolled immigration with his honed image as the courteous good son of Austria, Kurz contrasts with the nationalist zeal of Hungarian Prime Minister Viktor Orban and Italy’s Matteo Salvini.

Kurz has cozy chats with U.S. President Donald Trump and Russia’s Vladimir Putin while maintaining a frosty rather than confrontational relationship with Merkel. Last year, when her Bavarian allies tested her authority over migration policy, Kurz appeared alongside Merkel’s antagonists and toured German talk shows discussing the need to protect borders.

“The guy has demonstrated himself to be a supreme political operator,” said Carsten Nickel, managing director of Teneo, a company in London that advises on political risk. As for the EU, he’s no savior but he also doesn’t want to undermine it, he said. “Kurz clearly hasn’t sided with the euroskeptics, but we see a different approach than Merkel. He’s more of a center-right traditionalist.”

Like rebranding the People’s Party with the color turquoise instead of its traditional black, Kurz is about rejuvenating old conservative ideas. His main conviction is distancing himself from the social democrats, who he blames for years of inaction in Austrian government. That led him to form an alliance in 2017 with the Freedom Party, which has links to neo-Nazis.

He will go into the Sept. 29 election as Austria’s most popular party leader even after he effectively sank his own government following the revelation of a video of a senior coalition official trying to curry favor with a fake niece of a Russian oligarch.

“Public perception can change extremely quickly,” Kurz said in an interview in Vienna last week. “In such a situation, you do not know what is good for you personally or the party.”

The appeal at home is drawn from his clean-cut image, the blue-eyed former tennis coach heeding the counsel of the elder statesmen in the People’s Party as he was handpicked to climb the ranks. He names one of them, former Austrian Chancellor Wolfgang Schuessel, among his political heroes.

Kurz was told to keep his private life private, so he does. The only child of an engineering father and school teacher mother, he enrolled as a law student in Vienna, though never finished his studies. He lives with his girlfriend, whom he met fresh out of school, in an unassuming apartment building in the modest Meidling neighborhood where he grew up and likes to unwind with the occasional drink in a local cocktail bar.

He keeps his posts to his 1 million social media followers strictly business, tweeting about policy initiatives. You’d never catch him sharing what he had for lunch that day, Kurz said at Vienna’s grand Springer Villa, used by the People’s Party for meetings and down the road from where he grew up.

That, though, doesn’t make him inscrutable, he said, bristling at the suggestion. All he’s doing is fulfilling what he was told by his mentors.

“I always have to laugh if somebody says they don’t know a lot about me, because I don’t know many people who are so present in the media and are asked so many different questions,” Kurz said. “I’m 32 and there are now several books written about me.”

The interest in Kurz isn’t surprising given his rapid rise to power, and Depisch said it was always apparent that Kurz had the ambition for something big.

In the 2000s, the two would meet in the Sky Bar near Vienna’s opera house and talk strategy as members of the People’s Party’s youth wing. Kurz then became head of the organization in 2009 and was appointed state secretary for integration in 2011 while still in his 20s before taking the post of foreign minister two years later.

In spring 2016, Kurz quietly sounded out regional party chiefs armed with polling data suggesting that support for the People’s Party would leap with him at the helm. The effort to challenge then leader Reinhold Mitterlehner led to a confrontation where Kurz demanded breaking up the government with him fronting the campaign in the resulting snap vote. He won.

While Kurz is keen to portray himself as the reluctant wunderkind simply trying to drag his tradition-bound country into the modern era, critics say his power grab showed the Machiavellian behind the polished, respectful public facade.

“He represents a type of politician who wants power without a clear agenda,” said Mitterlehner, 63. Under Kurz’s government, “we seemed to be moving from a liberal to an authoritarian democracy,” he said.

As he bids to return as chancellor, Kurz is continuing to pander to people wary of immigration with promises of preserving Austrian identity in the fight with “political Islam.” But he’s also catering to the other end of the spectrum, talking about the environment, care for the elderly and the future of the EU.

He opposed the pick by Merkel and French President Emmanuel Macron for the EU’s next chief, complaining of a back-room stitch up. “The EU is more than only two countries,” he said.

During his time in office, Kurz widened tax benefits for working families and started to tackle Austria’s complex healthcare system. He changed policies toward immigrants by making it more difficult for those who are unemployed to access social aid and requiring proof of a certain level of German before their children can join regular schools. At the same time, he loosened labor laws to make it easier for companies to hire highly skilled foreigners.

On the campaign trail, Kurz has criss-crossed the Alpine country to meet with firemen, nurses and farmers. After leaving the interview on July 2, he spoke to entrepreneurs near the Hungarian border. Typically, the trip included photo opportunities involving Kurz listening to or chatting with small groups of voters in nursing homes, at outdoor markets and in the countryside.

Polls show the effort is paying off as he seeks to turn a political crisis into an opportunity. His party has gained ground and is ahead by at least 10 percentage points.

“He definitely has a sense for what’s mainstream and a talent for serving up policies in digestible portions,” said Michael Spindelegger, a mentor who thought Kurz had potential to become party chief when he stepped down in 2014. “His maturation phase isn’t complete yet.”

Indeed, it was Kurz who pulled the plug on the coalition and called for a snap election after he watched the video showing Vice Chancellor Heinz-Christian Strache and political ally Johann Gudenus on the Spanish island of Ibiza crassly attempting to peddle influence.

Strache thought he could save the alliance by resigning, along with Gudenus, but Kurz upped the ante and demanded the head of Interior Minister Herbert Kickl too. The anti-immigration hardliner resisted and the Freedom Party allied with the opposition to back a no-confidence motion and remove Kurz from power.

“In these hours, we saw the chancellor with a face that’s very different from the friendly, eternally smiling one we know,” Kickl told the Austrian Parliament. “You say that you’re sorry that the coalition collapsed. I believe rather that you’re sorry your power play didn’t work.”

–With assistance from Rosalind Mathieson.

To contact the editor responsible for this story: Flavia Krause-Jackson at fjackson@bloomberg.net, Rodney Jefferson

bloomberg.com” data-reactid=”79″>For more articles like this, please visit us at bloomberg.com