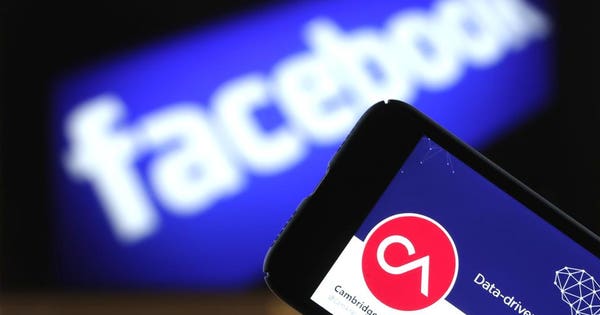 The verified Twitter page of Cambridge Analytica, displaying their logo and company name, sit on an Apple iPhone against a backdrop of the Facebook Inc. sign shown in an arranged photograph in London, U.K., March 22, 2018. (Photographer: Luke MacGregor/Bloomberg).

Despite the recent lack of public visibility from Mark Zuckerberg, CEO of Facebook, during the Cambridge Analytica crisis until he broke cover to talk to CNN, some pundits are asking whether he should have acted sooner in addressing matters. While admitting that the social media giant was “not on top of a number of issues” during the U.S. presidential elections, will it be enough to appease shareholders and others?

While Zuckerberg apologized for the Cambridge Analytica scandal, he said Facebook would be contacting millions of people whose data might have been misused by the political consultancy and admitted the company was locked in a tech race to stop Russian election saboteurs. This all came after reports last weekend that Cambridge Analytica had collected personalized data on around 50 million users without their consent.

Britain’s Culture Secretary, Matt Hancock, meanwhile said he did not think the changes indicated by the Facebook CEO go far enough. The Minister further indicated that laws to end the “Wild West” of the Internet would be introduced in due course.

Of course, when referring to “without consent” in relation to the collection of Facebook users’ data, this is where things get a little cloudy. And, while phrases and words like “data breach” and “hack” have been used by some media channels, it not entirely true.

In fact, what occurred was that users of Facebook voluntarily responded to surveys created by Cambridge Analytica by way of participating in an app called “thisisyourdigitallife.”

Still, it did not prevent Facebook’s stock price sliding on the back of the ensuing scandal and furore. The shares gave up almost 4% this Monday, a further 4.8% by midday on Tuesday (March 20) and $4.50 yesterday. They are now around $28 below the peak at the start of last month.

As an aside, President Trump’s announced move to impose $60 billion worth of tariffs on a number of Chinese products and introduce barriers to Chinese Foreign Direct Investment (FDI) entering the U.S. hasn’t exactly helped the mood of the stock market. The Dow Jones Industrial Average and the S&P 500 yesterday shed nearly 3%.

And, now there is even a petition in the U.K. that has been launched calling for Zuckerberg to testify to the British Parliament and to the U.S. Senate to answer questions. Having so far been signed by around 130,000 people at the time of writing, the e-petitioners also called for Facebook to “investigate and list any other violations publicly of our data by other third parties.”

“On one hand, it is quite surprising that Facebook’s CEO Mark Zuckerberg has not communicated on a timely basis to reassure shareholders and the public regarding the Cambridge Analytica scandal,” said Dr Michael Koch at the Kent Business School at the University of Kent, who lecturers in Human Resource Management & Organisational Behaviour.

The lecturer, who formerly worked as a consultant at the Human Capital Group of Towers Perrin (now Willis Towers Watson), a leading HR consultancy, added: “In such a case, you would expect the CEO of a company to react very swiftly to defuse the situation as well as possible, especially since the Facebook share price is sliding.”

Given that Koch’s academic credentials include a Master’s degree in Human Resource Management and Employment Relations from Université Paris I Panthéon-Sorbonne and a PhD in Management, he would seem well placed to pass comment.

On the other hand, according to Dr Koch, “This is a very delicate situation for Facebook, considering that this scandal, which involves sharing data about Facebook users, touches the heart of the social media giant’s business model. Any statement by Zuckerberg is likely to have strong implications for the way Facebook conducts their business and respects their users’ rights.”

Regulators on both sides of the Pond are also increasingly aware of the need to address Facebook’s problems. The whole scandal around Cambridge Analytica, which was exposed on TV by Britain’s Channel 4 News in an undercover investigation, goes to the heart of democracy in the western world.

It might well be that Facebook is “still trying to devise a proper communication strategy,” posited Koch, who previously worked at Swansea University and EMLYON Business School, and in 2015 co-authored the book, The Way To the Top: Career Patterns of Fortune 100 CEOs, with Bernard Forgues and Vanessa Monties.

Or, as Dr Koch put it just prior to Zuckerberg’s interview with CNN: “Management intends to ride out the worst of the storm before Zuckerberg issues any communication.” In the past, Facebook has been faced with similar problems, which have not created a similar backlash. So perhaps management has been surprised by the extent of the negative reactions.

Roger Lawson, ex-chairman of the UK Individual Shareholders Society (ShareSoc), a campaigning group with over 2,000 members, a seasoned investor who has Facebook account, remarked today: “It certainly helps if listed companies are upfront about problem(s) concerning their business operations and admitting failings early on. That said, I’m not entirely clear on what information was released and why Facebook might have been to blame.” And, Lawson suggested Zuckerberg “may have admitted more” than he actually had to.

While adding that the “main people to blame are the perpetrators who collected the information”, he nevertheless acknowledgeed that the social media giant was “perhaps at fault by allowing it to happen” in the first place.

Joakim Lundquist, Founder and CEO of digital communications agency Lundquist srl in Italy, commenting in light of the scandal said: “More responsible companies are asking themselves what their role should be in terms of allocating ad budget to ensure the platforms and content they invest in have a positive impact on society.”

Speaking from Milan, the Swede with around 20 years’ experience in corporate communications and a background in media relations, added: “Facebook and Google dominate online advertising globally, so in a world of fake news, hate speech and child pornography, they are in the spotlight on this front.”

Unilever, the consumer goods giant, which was ranked No.5 in the latest Lundquist CSR Online Awards in Europe, in fact made one of the boldest moves in this space yet by threatening to pull investment from platforms, which breed division or fail to protect children from toxic content. It called on social media to build social responsibility. (Note: Unilever’s general position on responsible marketing and advertising can be read via this link).

But for Facebook the big question according to Lundquist is whether major advertisers “will put their own sense of responsibility above the allure of reaching the company’s two billion users.”

In relation to that, Facebook was scheduled for a crunch meeting and talks today with major advertisers after ISBA, the trade body that represents the leading U.K. advertisers, indicated that around 3,000 – including P&G and Unilever, were ready to cut links.

The position of ISBA is that the use of personal data is governed by the Data Protection Act, which prohibits use without consent, except in exceptional circumstances.

And, big brands – not just European but global ones too – were reported last November to be pulling YouTube ads over advertising issues. News agency Reuters reported that confectionery maker Mondelez, Lidl, Mars and other consumer goods producers pulled their advertising from YouTube. This followed The Times newspaper in Britain finding that the video-sharing site was displaying clips of scantily clad children alongside the adverts of major brands.

Phil Bak, CEO at Exponential ETFs, an asset manager dedicated to providing exchange traded funds, who oversees the firm’s American Consumer Satisfaction Core Alpha ETF (ACSI) and their Reverse Cap Weighted US Large Cap ETF (RVRS) that both have holdings in Facebook, commenting said: “Zuckerberg may be addressing Facebook’s users and shareholders, but ultimately it is the advertisers who are his customers, and who must be reassured that their investments in Facebook advertising will not backfire on them.”

Bak, who was previously a Managing Director at the New York Stock Exchange (NYSE) where he worked with asset managers, regulators and liquidity providers to ensure a fair and orderly secondary market for ETFs, added: “Facebook’s growth trajectory is dependent on the satisfaction of its advertisers and the efficacy of their ad spend. If data usage is a moving target and advertising firms will be seen as unfriendly to the users, then Facebook has a limited value proposition to sell to those advertisers.”

Neil Wilson, senior markets analyst at brokerage ETX Capital in The City of London, commenting in relation to Facebook’s shares, said: “What we are seeing now in terms of the sell-off in Facebook shares is the market applying a discount based on a couple of new headwinds for the stock.”

He added: “One is the reputational damage – the risk that consumers ditch the platform. This looks suspect as the tentacles and reach of this beast go a long way and it is hard to see consumers meaningfully abandon the platform. Where else would they go?”

A second headwind is regulatory pressures. Namely the threat of greater regulation, which might affect the company’s data-driven online advertising model.

Concurring broadly with Exponential ETFs’ Bak, Wilson, a London-based Scot, posited: “The entire investment thesis is based on selling data to advertisers and other companies and the scandal throws doubt on that. So we see a discount attached to the stock that was not there before.”

Facebook’s Price/Earnings (P/E) ratio at about 27 now is down a fair bit and may in fact “better reflect the risk associated with the platform’s earnings growth potential” according Wilson.

Versus Twitter’s P/E of about 96, Facebook’s P/E (26.76) makes it look relatively cheap. However, Twitter is a very different social media platform and one that does not depend on harvesting and selling such deep and rich data on its users. Google is better for comparison in terms of the Internet oligopoly and is trading around 32 times earnings, with its shares having declined by about 10% over the last fortnight.

Now while the hashtag #deletefacebook has trended on Twitter and Facebook’s market capitalization has fallen by over $60 billion, it is premature to talk of a doomsday scenario for the company just yet.

Siim Õunap, an Estonian FX and cryptocurrency trader who studied Management at university in Denmark and correctly called the recent decline in Bitcoin’s value, asserted: “Facebook is too large of a giant with over 2 billion users for this scandal to have any permanent effect. The majority of users are not going to stop using the platform despite the breach, and as such Facebook and its stock price will recover. However, that aside the privacy and information security topic just went to a whole new level.”

Whatever else, this story has a lot further to run. And, no doubt Mark Zuckerberg will be facing the politicians on both sides of the Pond before long to respond further. But as Sir Tim Berners-Lee, the inventor of the World Wide Web, who applauded Channel 4 News’ reporting to TV anchor Jon Snow when interviewed this week said, the Cambridge Analytica data debacle is a “serious moment for the web’s future.” Few would doubt that.